How Bad Chinese Manufacturing Led Me To Make a LED Deng 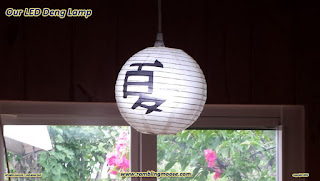 A Deng is a Chinese Lantern.  They are pretty common, they are made out of a frame and paper that can be brightly colored or have patterns.  These aren't the Sky Lanterns that fly through the air with a lit candle, this is more of a decorative "ball" type of a lantern.

They do seem to bring a smile to my face.  When I spotted one, I kept it thinking "I should do something with that some day".

Yes, my house is full of those sort of projects.  Things I should do something with some day.  Moving from house to house should solve that but that is not in the plans.  So the Projects mount.

What happened to get it to where it is today is a long and twisted tail that involves alleged drunk driving, my own creativeness, and some truly typically bad Chinese manufacturing practice.

I'll say this right off.  It is well known that people who make light bulbs of any type have been skimping.  There is a bulb in a firehouse that has been burning 115 years since the early part of the 1900s.  It is a "Centennial bulb" that looks more like the insides of an old Radio tube to me, but there it is.

That company that made the bulb never made any more money on that bulb and that's the problem with Capitalism.  The light bulb companies conspired and colluded to make their bulbs less sturdy until you have the problem I had.

Helpful hint!  When shopping for Light Bulbs, look carefully at the packaging.  Make sure you buy bulbs that have a 25,000 hour life span.  Leave the lower hour bulbs at the store!

You see my Ceiling Fan broke.  I pointed a remote control at it and it didn't turn on.  It refused to light, it refused to spin.  You need a Ceiling Fan in South Florida.  I thought I would procrastinate and in a few days we would go to the big box store and see if they still had this fan.   Going back to the well and seeing if it was not dry meant we could exchange it for a new one.

They had them and we grabbed one.  As an aside, I got a spare battery for the remote, just in case.  Type A23 batteries.  The same type as in my Jeep's alarm remote.  I need new ones for that too.  It turned out that with a new battery, the ceiling fan worked.

We put the new one up anyway, and that one worked.  But out of the six incandescent light bulbs that came with it, two did not work.  We are going to put LED lights in that anyway so I grabbed the bulbs For Projects.

The other part of this story with the drunk driving, allegedly, that is, happened about 5 years ago.  Someone had a tricked out truck with ground effect lighting and a stupidly loud horn.  He drove this beast into the shopping center near my house and proceeded to back it up, clumsily, into a parking space.  He also backed it over top of a cement parking space block and ripped out those same lighting strips, in four pieces.

The lighting strips, I of course, picked up.  For Projects.  Bright white LED Strips that will run on next to no current at 12 volts.  My brain racing, that means that I could basically have free lighting coupled with my solar charger and a couple old laptop batteries and ... so forth. 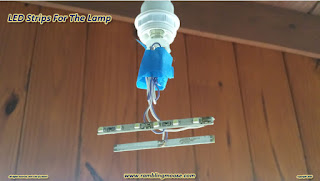 I wired them up with old telephone wire that was discarded by the telephone company one day.  The wires were stiff enough to stand up to some abuse, and hold the LED strips upright against their own weight.

The little LED things would run for days on three rechargeable laptop cells, so they would make an amazing emergency light.  When power goes out here, it goes out for a very long time, especially when Mother Nature is involved.

I'm looking at you Wilma.  Two weeks without power on my block means it would not be a good time to vacation at the beach!

So when the bulb blew, For Projects became Now.  I tested them one last time.  One bulb was dead.  The other popped immediately when plugged in.  I had my base.

The cord was salvaged from an old Ikea lamp that was in my back yard for years.  It had a small candelabra fixture in it that the bulbs fit.

With a tap from a pair of scissors, the glass broke away.  I was able to use the scissors to chip away almost all of the rest of the glass and that gave me the connectors I needed.  Since everything I was doing was low voltage, I used blue construction tape to insulate things and wired up the contraption.  One connection to the ring, the other to the tip. 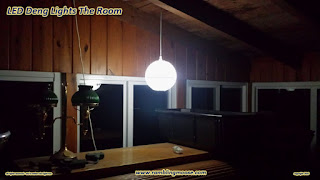 I had my Deng lamp.  Now, to assemble and "Smoke Test" it.   It worked!  Actually, it really looks quite nice.  Enough to light the desk under it and it is quite bright on a 200 milliamp, 12 volt power brick from an old caller ID box.  2.4 watts of power to get a light that is about as bright as a 40 watt incandescent bulb.

Now, I don't know how long that will run.  Someone bumps into the connections, it will go dark.  It won't shock anyone, that kind of power may run a portable radio, but not too much else.  But the light works.

A giant pile of broken bits, discarded wire, and a drunken mistake gave me a rather nice light.

And a story about my own electronic OCD.