But hey, I still have power...

At least through Sunday Morning, I have.

It wasn't until 4PM here that I saw the first rain that left enough water on the ground to sheen the streets.

The county declared a curfew from 4PM through.  I'm guessing the duration.  I don't know when that is.

The only thing that has bothered me is a few power pops here and there.  When power does go out, we're sunk.  I can't say that they'll be by to reconnect us at that point, because there is some wind speed that they stop work at.

I seem to remember 35mph.  We are over that now.  44 was the last check, although it's been gusting faster.

Then you're on your own, cowboy.

This isn't a whole lot to deal with compared with Antigua, Puerto Rico, the DR, Haiti, and Cuba.

It could be worse, I could be in the Keys.  The Eye of the Storm right now is crossing into the lower keys, and they're still predicting that trip through Key West and up the west coast of Florida.  My heart goes out to them since I can't say I would want up to 9 feet of salt water piling up on my house.  That's going as high as 270 CM.

This map is of the expected storm surge.  Those pink areas are where the 9 feet of salt water comment comes from.  Naples, Marco Island, north up the coast. 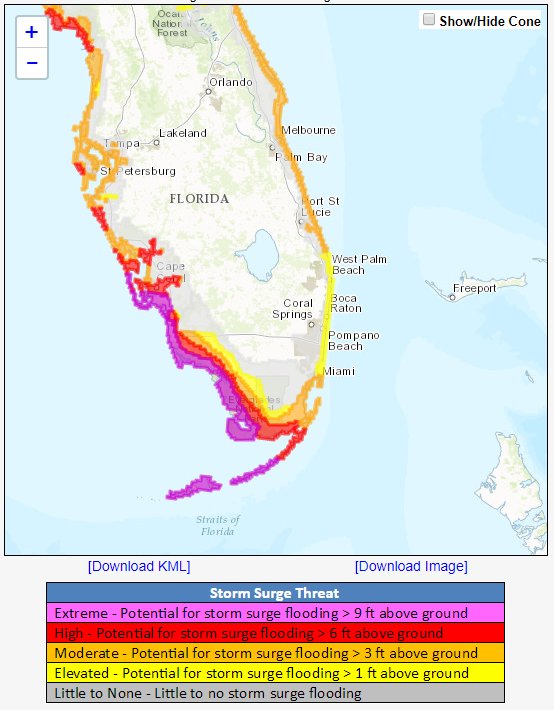 I grabbed that map from the NWS Miami Twitter Feed.

I stocked up on rechargeable batteries a while back.

Why laptop batteries?  Each one is a larger and longer cell configuration so they will not fit inside of a standard radio or flashlight.  They also put out more voltage at 3.7 VDC compared with 1.5 VDC for a D, C, or AA Cell.

Each one puts out between 2 and 4 amps.  Connect four together and you get 14.4 VDC.  Run them through a voltage regulator like that cigar lighter thing to charge your phone in the car and you now can recharge your phone a couple times.

So those 18650 batteries will charge my flashlights for months.  Battery operated fans for weeks.  Radios will play.

The air conditioning may not work due to power outage, but I will be able to listen to crappy music.

If you want radar?  Follow this link.  Remember that the highest point in the Keys is on Key West at 18 feet.  The map showing those islands should be considered a suggestion since most of them will be overwashed by storm surge.

But so far, for me, I'm lucky.  Not even anything worth taking a picture of here in Wilton Manors, and I thank my lucky stars for that.
Posted by Bill at 9:32 AM