Did you set your clocks back?

It's that time again.  Here in Los Estados Unidos, we are setting our clocks back an hour in 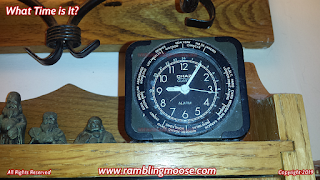 an effort to "save" daylight.

I am not fond of it.

Neither is my dog, Rack.

Here in Florida, they were going to make Daylight Savings Time permanent.  It was one of those non partisan things that the people in Tallahassee could decide on.  But with the gridlock that they have had in Washington since the Clinton Administration, nothing has happened about it.  It needs to be passed by the Federal Government apparently.

I think they're preoccupied with getting some other trash taken out right now.

Regardless, I get up about the same time every day, gather myself and the dog up, and go for a mile walk before sunrise and will continue to do so.

See, there's a lot of oddballs out there at that hour, along with the "early" dog walkers.

I have a nice conversation with the dog.  He does talk back, or at least responds with a hearty tail wag.  I have a Dog Directed wander around my block, or my neighborhood.  Do a little window shopping, and then come home for dog food, coffee, and breakfast.

I will say if they could Set It And Forget It, that would be great.   Make up your mind and set things right.

Won't matter though.  Rack will be hungry at 5pm, er make that 4pm.  I'll have to feed him when his time comes, regardless.

It's like snipping an inch off a belt and attaching it to the other end and thinking you've saved something.

I'm not obsessively buying clocks, I simply don't throw something out when it works. It takes decades for a clock to break and time pieces are a great "Guy Gift".

I have one sitting on top of a shelf in my bathroom that was a give away back around 1984.  Chaz it says on the face.  Chaz was a brand of cologne that was mass marketed as a push to sell women's cologne to men in the US.  It didn't last all that long.

Reminds me, hey you get off my lawn, it's too early for that!

Way too many clocks in this house.  Now I need to set some clocks, if you'll excuse me...
Posted by Bill at 9:25 AM