A Little Play, A Little Thumb, A Little McNab Dog

It's happening.  Rack has finally decided to play like a puppy. 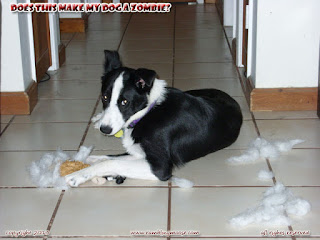 Oh, sure, he'll chew up his toys.  He's managed to strip all the limbs off his "Mean Cat" plush so that now it's more like a Mean Torso, and he's shredded his little purple teddy bear so that it finally went for burial in the bin.

That all is great, and expected.  Even when Lettie was in her last few months, she would pick up the toys from time to time and give them a great big flap.

Puppies have their mouthy moments.  They happen when you're petting them and all the sudden you become a chew toy.   Rack is now about 10 months, pushing 11.   Since he's my McNab Dog rescue, we really only have an approximate age.   So we've decided he's a September Puppy and we'll call it September 11th.   Easy enough date to remember due to its other much more dark connotation.

With a puppy, they'll mouth anything they can.   Laying on their back, legs splayed in the air, wiggling like a worm, you will find that their mouth is wide open looking for something to put those sharp puppy teeth onto.  That all takes some confidence.   If that puppy was a rescue, and especially shut down as Rack was, finding that today was the first day I became a chew toy is actually a good thing.

I was sitting in my chair after the first walk, minding my own business.  My right arm was being occupied by an upside down dog who required it.   Petting his belly itself says "I feel safe and comfortable and accept you as my lead".  Fearful dogs don't completely accept that, nor does your Alpha Dog.

Every so often, my right hand needed to be given back to the task, opening up a new web page or typing in some command on the black laptop.  Every time the hand would go away, it would be watched expectantly for its return.  Every time it returned, the play ramped up, it became a wee bit more playful, more happy for the return.

I realized my forearm was cold from the dog slobber on it, and my thumb was buried among wet canines and a big pink tongue.

Yes, I became a large chew toy.  My dog was sucking my thumb.   Weird enough when I said that to myself, I pulled the thumb away from the pain and moved my hand back to his belly.

Well THAT lasted all of about 23 seconds when...

Nom Nom Nom, my fingers became chew toys and the rear feet were pushing my forearm toward his mouth.

I can see that being truly "productive" would have to wait, I had a puppy's mouth to fill with my right hand.

I'm a big furry salt lick with interesting things to chew these days.

I've had puppies before and we all have had the pleasure of a warm furry ball of fluff cuddle up to us with razor sharp teeth that were teething on us.  This wasn't that, this was a mild statement of arrival and acceptance of place.  This was a formerly shut down dog saying I've arrived and I'm part of the family.

It is a long journey from cowering in the back of a shelter to The Mat next to my chair and gnawing on my right hand.  It took three months.   That is a long time in the life of a puppy.  It takes a while to become the chew toy of choice.