Having a swimming pool in the back yard, there's one thing you have to consider.  Your Dog.

In my case, there's an in-ground pool that has a deep end that I've been told is much more than usual these days.  More than my own 6'4", it demands respect.

Since I have a dog, it is time to consider just how well he can swim.  The only way to find out is to get him in there.

Here's the rub - some dogs love water and some hate it.  Mine seems indifferent to it.

But you do need to get him in there.

Now you can get your dog in the pool in many ways, the stereotype of a Labrador Retriever Puppy jumping in on their own is a stereotype for a reason.  On the other hand, a Bulldog might just sink like a stone.

The main thing is that you have to supervise them.  Letting your dog out in a back yard with a pool or a creek or some sort of water with you standing inside the house, well that's simply stupid.

Our first time with Rack in the back yard had him walk out the door, sniff the pool, then walk away to the palm tree and lay down.  He claimed that as His Spot.

Great.  I'm safer knowing that he's not going to dive in and I'll have to perform CPR on a puppy.

Yes, I'm trained.
No, I prefer not to use my training.

We let that ride for a while.  Rack gained his curiosity and his confidence but never stepped in the pool.

Finally the wet season hit us as well as the normal Florida Warmth in early summer.   The pool water is a toasty 86 and I took the opportunity to do a little cool down after pulling some weeds.

My one neighbor thinks Virginia Creepers are pretty.  I disagree since they end up covering my hedges like a blanket.

After filling one trash can and making a dent in the second I got out of my shoes and T Shirt and "Accidentally Fell Into The Pool".

Rack seemed intrigued but didn't really want to take the step.  Fortunately I had some jerky treats that we put into a bowl and took out for this little plan.

Between my being in the pool and his own curiosity I was able to get in to stand over the water and get a snack.

Still I didn't pull him in.   I didn't want to make this a traumatic experience for him.   It took me about another 20 minutes until I realized that he had wandered to the fence and found a T Bone from the dog next door.

Not knowing how nasty that might be, I walked over and took the bone from him while lifting him up.  It was time, and I had the excuse.

Dropping the bone in the trash, I stepped into the shallow end.  Rack had no idea what was up, but didn't like the idea of being in the pool.  I didn't think he would.

He stood on my legs and acted fearful, which wasn't a shock.  After all, he was known as The Shy Dog when I got him from The Dog Liberator almost three months ago.

He didn't completely freak out.

Knowing that this was going to be stressful, I didn't keep him in the pool for long.  I moved, he slipped, and ended fully in the water.  That lasted all of about 15 seconds until he got his purchase and walked out of the pool using the steps.

I learned a couple things.

First, he can swim so the pressure is off.
Second, while this can be stressful to the dog, it needs to happen, eventually, and gently.
Third, slow and steady wins the race.  It happened so it doesn't have to happen Every Single Day.  That could be a way to make a dog into a cowering mess if they're not ready.

The most important thing is to do it gently and let the dog guide you with how much they are able to take.  Use treats to get them curious enough to get close.  Don't let your own pride get in the way causing you to make a mistake and force the critter into the water.  After all, this is an initiation rite - they may actually enjoy it.

Finally, if they just hate the water, you have to learn to accept that and regroup.  It could be that you approached the process with the idea that you are going to force the dog into the pool - that's absolutely the wrong idea.  They can read your energy better than you can in many cases.

The process for me took 20 minutes of my dawdling and bobbing around in the full sun of the South Florida Afternoon.  Another 10 minutes and it was over and done with for the day.  But we're safe.  He can swim so I won't have a bad accident on my hands if I'm in the kitchen and my attention strays to what I'm making on the stove. 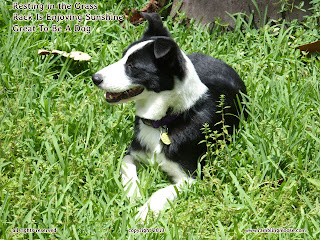