Banana Leaves in the Morning Sun and A Ground Water Shower

I have a routine around here.

Once I've gotten back into the house after a 45 minute dog walk in the morning, I put coffee together.  It's after the dog has been fed, he gets food first simply because he's a painfully slow eater and I end up tapping the food bowl to keep him focused.

He is smaller than he would normally be because food is such a low priority.  That means that I end up being his hunger signal, twice a day.  The old school "take the bowl away if he doesn't eat" doesn't work and is merely cruel, he would simply stop eating out of fear and acceptance of "This is how it is".

But once the food is in him and I have had my coffee, it still is a while to sunrise.

At 7AM, the irrigation system kicks in for a half hour.

Did I even need to ask?  He's standing at the door nodding his head "Yes!" like I'm a fool that should get out of his way.

This is the low flow drip feed irrigation that is a maintenance chore.  Every day I have to go out and inspect the hoses and feeds to make sure that all the plants are getting water.  If I see water dribbling out of the individual head, I'm moving to the next one.  If you don't blow out the lines frequently things clog.  If you do, you are treated to a slug of mud that collects in the most distant part of the system like where my flowers are growing.

Lines the thickness of over cooked spaghetti made of black plastic, sliding onto compression fittings pierced into larger black plastic water lines.  It all ties into a thicker PVC Pipe somewhere that hooks into the valve that is computer controlled.

It isn't what I would call complex, just involved and fiddly.

Why "Fiddly"?  Because plastic is something that changes in the environment.  It eventually dries out due to UV Light exposure and will crack because of that and the pressure changes that happen during the day when the lines are "charged".

That was where I got in trouble.

I noticed the spray out of the connector at one of the orchids that is growing into the wood on the fence.

Saying to Rack "I'll get back to that", I walked into the yard.  Rack was at my feet because he was herding me to convince me to go inside.  There must have been a trash can lid slammed somewhere in Downtown Fort Lauderdale, two miles away, and he heard it.

"Deal, dog, you need the exposure to noises" and the FEC train was coming up from Miami.  You can hear the whistle a couple miles off and it brings the people up North the Brazilian Oranges they think they are getting from Florida.

Yes, they are coming from Florida.
No, they aren't all grown here.  That is why you can get orange juice in October.

I make a round of the yard.

My Bamboo cuttings are coming in, I will have five plants back by the fence in the utility easement.

The Poinsettia is growing so well that last year's red leaves are covered completely and it is about hip high.

My Podocarpus cuttings are doing well, there is bright green growth on the tips. 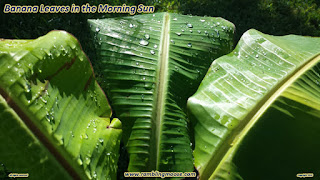 ...And then I spotted the Banana.  I have one original pot, and two cuttings I am getting going for no good reason.  I have nowhere to put them but I like saying that I can grow the things.  But I was standing on the West side of the plant that moment.  The sun had just cleared the tree line and the fences to the East.  The irrigation and the morning dew had done their thing as well, leaving large drops of mist on the surface of the leaves.

This has to be why I grow the stuff.  Gardening.  The light refracting off of hundreds of beads of water causing rainbows and sparkles in the morning.

Looking at and marveling at the improbability of it all, I realized it was time to fix that one line.  The rest of the irrigation was running perfectly, which is a rarity.  Usually something somewhere has clogged on a daily basis.

In order to have irrigation lines that crack, clog, and spray, first you have to invent the universe.  (Apologies to Carl Sagan)

I walked to the wet wall, slowing my pace on the slick wood deck.  Reaching through the spikes of the bougainvillea that scratched my arm bloody, I just touched the connector.  It was at that point where I was immediately standing under the Niagara Falls.

The pressure was so high that it sent a stream of ground water up over my head.  Luckily for me it missed me until it hit the roof.  The backsplash was as intense as my shower head in the bathroom.  The water was now running down my head, into my eyes, and on the shirt.  Down the roof it dripped under the Lanai roof and onto the kitchen window.

"Damnit, I just cleaned that thing!"  It was a solid 20 feet from where I was standing, a good room away.

I reached over, clipped off the end of the water line, jammed it back onto the connector and the deluge stopped.

"All I needed was soap and I could have had a shower!" I mused
Rack looked at me as if to say "Am I safe?  Can we go in?  Are you through playing with the water yet?"

"Yes, soon, yes" would have been my answers.

Mom said don't play with the water.  This is my way to do that.  I just would prefer not to do it every single morning.  Even if it does get me up looking at the beauty that can be found in just about any suburban back yard.