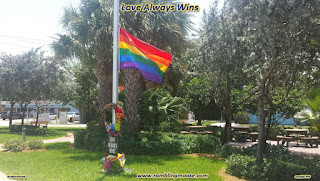 This is a picture of the Nations First Permanent Pride Flag installation, or so I have been told.  It stands on Wilton Drive, across from City Hall, in Jaycee Park. Taken June 14, 2016 at around 2 in the afternoon.

About a week after it was installed, the murders happened in Orlando at The Pulse bar.  Now the flag is at half staff along with all the other flags that were seen on Wilton Drive.

It was described by John Oliver as The Most Florida Thing That Could Ever Be.  A Latino night at a gay bar in the theme park capitol of the world.

Or very close to that.

It was a closeted man, hyper religious, and hyper authoritarian.  He had a profile on a gay dating app called Grindr.  Whether he used it to date or to look for victims, we don't know yet.

Probably both I would expect.

We do know he basically hated everyone, according to what his boss said in the interview that I saw.

I will not Pray For Orlando.  It was religion and prayer that got us to where we are.  Had this murderer been following a Religion of Peace, he would not have killed.  His own personal version of the particular religion that he did follow was a twisted relic of evil once his hateful mind got through with it.

I will leave it up to you to judge.  I simply will never support someone elected to office who supports the possession of those sorts of weapons.  They are designed to tenderize their victims and turn them into hamburger before the victim hits the ground.  They are designed to kill people more effectively.  They have no place in this world.

It is long past time to act.  If Sandy Hook and 20 children dying there, and Columbine's massacre weren't I doubt this will be acted on either.  It probably is too profitable for the paid off class of people to want to anger the NRA.

Enough praying.  Time to pass some meaningful gun control laws in this country and where ever else needed.  If the laws are there already, why aren't you people enforcing them?