Why Does FPL Want To Ruin My Pizza? 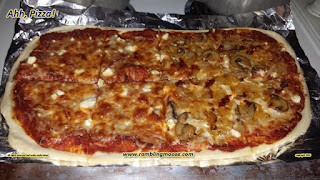 Sundays.  They have turned into Pizza Day.

Made from scratch.  Scratch Crust, Scratch Sauce, and the toppings are my own mix.

I have this pizza recipe down.  The dough is Pat's Pizza Dough.  The recipe comes from my sister.  She had it in a recipe book that she was given when she got married back in The Nineties.  I sat at her table with a stack of little square pieces of paper and wrote a whole bunch of recipes down and kept them.

I still have the original square paper for this.  It's faded, water spotted, stained, and just about everything else you can think of that can happen to a piece of paper after some 20 plus years.  But the recipe is bullet proof.  Never fails.

Oh sure, I have adjusted it for Florida Conditions.  Bad water that comes out of the tap slightly brown and tastes like it has been sitting in a garden hose in the heat.  Flour that is commercial high grade, and rather thirsty and seems to like brown water.

Instead of what the recipe says, I've bumped it up to 12 ounces of water.  I know what the dough "feels" like when it is right.  Every experienced cook has a recipe they do By Eye and get right.

In fact, I'll put my own pizza up against anyone else's on the island now.

The dough makes 1400 calories of bread, I weigh that in grams, divide by 10, reserve 30 percent and that makes one crust.  The cheese is exactly 6 ounces.  Sauce is exactly 7 ounces and is a home developed clone of the best sauce on the island from a closed Pizza Shop.  Yield is a pizza that is just about 1000 calories total depending on whether I go with 30% or 33% of the dough.

The point of that is I Know This Recipe.  It goes well with a single beer for Sunday Lunch.

I start this all at 9 AM.  Make the dough, weigh and separate it out.  This pizza was 30% crust, allowing me to make 6 rolls out of the remainder.  101 grams per roll.

It got rolled out and allowed to rise in a protected place.

11:30, I put the pizza together.  The vegetables were sauteed to drive out the moisture. Cheese mixed.  Sauce layered, followed by the cheese, and finally the veg.

I reached into the refrigerator, grabbed a fine ale, and sat down to enjoy a brief rest as the oven came up to temperature.

BOOM.  I hear that apocalyptic sound of a "Pew" as capacitors in all the appliances discharge.  The fans stop.  It is silent except the ticking of the mechanical clocks.

You see this part of Florida, Wilton Manors, Fort Lauderdale, and Oakland Park is in Broward County.  The East side.of the county was built up first and it was built to the edge of the Everglades National Park until no more room at the inn.

Florida is full.  If you're moving here from somewhere else, don't think it is an open place of palm trees and wading birds.  It is, but those places are usually redneck, infested with evil things like alligators, mosquitoes that would carry off a large car, and Republicans.  Swamp People.

But all that demographic nonsense?  You see what happens is that every so often we get, yes, a Hurricane.  The last one that hit here was Wilma in 2006, and we're overdue.

The telephone poles look like they were here before Wilma.  You may ask, how can I tell?  Simple, they all seem to lean slightly to one side.  They're almost all sun-bleached on the South side as well.  Southern exposure here is redundant, they're kind of a grey color.   I know, I'm looking at one now.

That would be that boom I was talking about.  It happened as I was just out of my chair and took my very first step across the living room to the kitchen.

What caused it was a two or three year old repair to a High Voltage wire on a pole about 100 feet from my house.  We were told it was "done badly" and "it just let go".

I walked into the kitchen.  Oven temperature was 450. It was dropping.  I slid the pizza in anyway, and went into the living room.

"I really don't want to finish this off in the grill."

Crappy infrastructure means we have backup plans here.  In places where the weather is more gentle, like, say New Jersey in my sister's native Cherry Hill, you talk about power outages, but they never last more than two hours or so.

My friend works for the power company in Atlanta.  When I tell him what I go through here with the power, he shudders and says "Southern Company would never accept that sort of failure rate" and then segue into a long conversation about how awful the power is here in Florida.

When I moved here, I lost two computers because of the twice daily "Power Pops" I get.

Trust me, it really is that bad.

Six minutes passed.  The pizza was actually done.  A wee bit under, but since I opened the oven, I lost the rest of my heat.  It was now down to around 300F.

"Well, lunch is served.  I'll put the rolls on the grill."

The pizza was actually quite good, better than most here.  But it wasn't exactly a crispy cracker crust I obsess over.

I go outside and put the rolls on the grill and close the lid.  I know exactly where to turn the knobs to get the grill to heat to 430F.

Setting the timer for 11 minutes, I come back later.

The first rolls are done.  Surprisingly good looking for something that was cooked under the Lanai.  I put in the second set.   They come out perfect too. 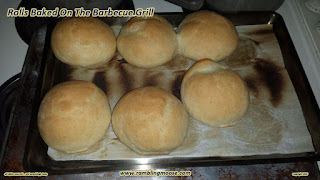 Actually the grill hot spots, so I will remember next time to put bricks in the grill to keep the cookie sheet up off the actual grill work.

"Now what?"  We were without power.  Full but no power.

"Luckily the house has hurricane glass and new roof.  We'll have to see".

We had some small battery operated fans for when it was warmest, but it served to remind me that while we do have a generator, it won't power the Air Conditioning in the house without some more work.  Yes, we've got more hurricane prep to do or else it's pile the dog and the parrot in the Jeep and drive North in case of a power outage.

Wilma did that.  My block was without power for two weeks.  I was told this over and over.  Two weeks of sitting on a floor and using D Batteries to power a small battery powered fan in an emergency is not fun.

So please, FPL, fix your infrastructure.  I don't want to get used to baking rolls on a grill.
Posted by Bill at 10:20 AM