Standard Internet Warranty Applies here:  Ramblingmoose.com takes no responsibility for damage.  If you wire this up incorrectly, shock hazards may occur.  You could burn yourself with the soldering iron.  You could also cut your finger and give yourself a "boo boo".  We are not responsible.  We're simply saying "Hey, it worked for me, it's easy, give it a try!".  The parts needed are commonly available online and can be read about in depth at this wikipedia page.

This is actually my Second Conversion.  The first one is in the first picture. 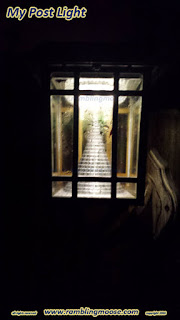 We've probably all chewed through a collection of solar powered lights for the yard by now.

I say chewed through because they generally do not last very long.  The first wave of lights were particularly awful.  Under powered, lit with a single LED that is about as bright as an indicator light on a stereo, and connections that are not suitable to be used outdoors,  you may get a year out of these if you were lucky.

Then there came another wave with brighter LEDs, but they wouldn't last long due to the batteries failing in about a year.

There is a theme to this.  Batteries have a set number of times that they can be recharged.  No matter how cheap or expensive the light, if that battery that is being charged by the solar panel dies, the light is normally dead.

Besides, everything being cheap Chinese garbage manufacturing, you can't generally get better life out of this stuff.

We went to a "rather nice" light the last time this happened, and got a year out of it.  Since I liked the fixture, I tried soldering in a collection of batteries to power the thing.  After the second try the light failed.  I set it aside hoping for a "Bright Idea", pun intended.

Our own house ended up going with Low Voltage LED Security Lights.  My front porch is now bright enough to read from the light, and the power consumption is all of 4 watts at 12 volts AC.  Doing the math, that works out to 4/10th of a watt at 120 VAC out of the plug.  Adding the traditional 10 percent for error, we're consuming 1/2 watt of mains power to light a room worth of porch.

Next to nothing to get our security lighting sorted out.

But those solar lights were waiting to be used.

The Solar Lights had a battery pack inside of them that consisted of three AA rechargeable cells.  Maximum voltage would be 4.5 VDC.  I had 10 L7805 Voltage Regulators here, and I decided to try one out on the solar light.  It would be over powering the light at the high end, but since the light was either being reused or disposed of, if I got a couple months out of it I was happy.


A L7805 is a voltage regulator that puts out 5 Volts DC.  I had a low voltage supply for the yard at 12 Volts AC.  The wiring was simple, I put one together to see if it worked.

I allowed it to run in the intervening two and a half months and it was still working. 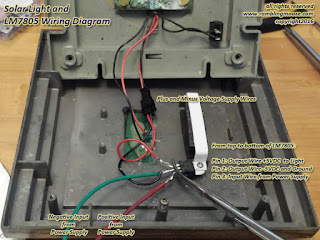 The entire soldering job took me less time than it took for me to take the pictures for this article.

The proof is in my yard.  That easy.

Just remember, match the voltage regulator output voltage to the supply voltage of your lamp or other appliance.
Posted by Bill at 12:00 PM