Twice Baked Potatoes - When A Recipe Is Not A Recipe

The deal with Twice Baked Potatoes is that it isn't this big fancy thing. 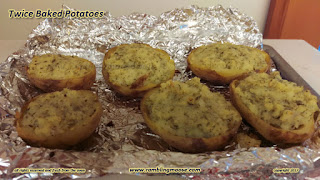 You see first, you make too many baked potatoes.  Everyone does it now in the age of the microwave, has a dinner, makes too much and they sit in the fridge until  someone nukes a leftover and ... well you know what I mean.

A Microwaved leftover baked potato is not terribly appetizing.  At least to me it isn't.

I don't want to run the big oven for just one potato.

Recipe for that is simple.  Scrub the skin or peel it off.  450F/230C oven.  Rub spices and olive oil on the outside of the potato.  Puncture the skin.  Wrap the potato in foil.  Cook for 75 minutes or until tender.

Now you either have leftovers or you just made one.

Let the potato cool.  You need to handle this thing with bare hands.

Now, when you go to eat it you tend to add things to a baked potato, right?
Butter, cheese, chives, dill, onion, bacon...  A long list.  It is what YOU like.
Guess what.  The recipe for Twice Baked Potatoes reads like that.  Granted you add a few drops of milk but there isn't much more.

First, Slice the potato in half lengthwise.

Second. scoop most of the potato out of the skin, leaving enough that the skin will stand on its own.  Less 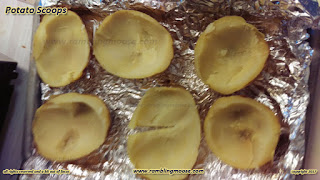 than a Centimeter or a third of an Inch will do it.

Third, place those insides of the potato in a mixing bowl or the bowl of a food processor.

Finally, add to the bowl your own mix of spices and cheeses.  I recommend using cheese, it helps keep it all together.

Specific amounts for this step:
See?  I told you it was simple.  Now... 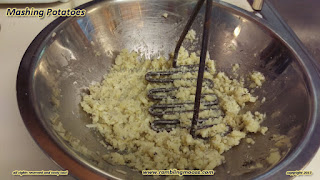 Bottom line with this is that I tend to make things ahead.  I tend to bake these until I spot a little caramelization in the tops of the potatoes then quit.  Since I will be re-reheating this stuff, I will toss it inside the toaster oven.

Can you tell, it's a very forgiving recipe?

The proportions are simple.  For each mid sized potato it is 1/2 Tablespoon (7g) of butter, 1/3 ounce (10g) of cheese, everything else is To Taste.

The cheese will bind this stuff together when it gets hot.  Think of mortar holding bricks together.
Posted by Bill at 11:33 AM