Peanut and Banana Sandwich by Squirrel 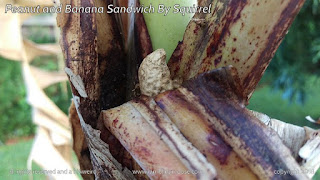 To quote a wise man from San Juan, Costa Rica:

We live in the tropics.  If you drop a seed on the ground, it will grow.

If you don't want a giant mess in your yard, if you're looking for something a bit groomed, don't blink.  That "clean" look takes a lot of work here in Florida.

I could go a while before weeding my backyard in Philadelphia.  The soil was somewhat fertile, but things took their time to grow.  Sun angle up there is 14 degrees lower at any given moment than it is here so it will be proportionally less effective, proportionally less bright.

I have a yard inspection every morning, on a clear morning, at 7:30.  I have to inspect the irrigation systems, clear out the palm fronds, remove any debris that falls from the trees into the pools, and basically police the perimeters of the yard.

I have help with me.  Mr Dog, my one and only Dingus, Rack the SuperDog (TM)  will follow me around the yard, and go into places that my own nearly two meter height will not fit.

I found out that he will answer to Dingus because when someone does something a bit wrong, a bit silly, and a bit dumb, I have a habit of calling them a Dingus for doing it.

I am not exactly sure that it is even officially a Word according to the O.E.D., or Webster, or anyone else, but I use it.

So much so that my Dog adopted it as one of his names.   He figured out that he is Mr Dog early on, so why should I be surprised?

Stepping outside, we hear chattering and rustling in the Utility Easement behind the property.  It is, predictably, very thick with plantings, even though Rack goes back there for relaxation.  Yes, we shall call it Relaxation.  As in Rest Stop at mile marker 108.

I see something grey flash in my right eye and go on about my own business.  Spray the Milkweed for Aphids.  Wiggle the drip-feed water bubblers to clear them from any debris inside that blocks the flow.  Inspecting the pots in the backyard is a daily occurrence.

I get to the banana tree that I have been babying and think "What on earth is going on back there" when I spot that the tree had been planted itself.

There was a peanut.  Wedged deeply enough that it would have to be removed or else I'd have a Peanut and Banana sandwich there about chest height.

Then I woke up.  I realized what was going on.  The chattering got more insistent, so I walked to the corner of the yard.  Deep Jungle, or what passes for it here in Florida.

I had Squirrels.  Arguing.  Loudly.  For dominance.  Who knew?  I thought they were a peaceful species.

Squirrels arguing was like a pillow fight with Marshmallows.  Nobody really was going to get hurt but they were really going at it full blast.  It looked like a Cartoon.

I threw that errant peanut into the corner hoping the squirrels would break it up and move on, but it wasn't enough.  I was within a yard of them as they're running up and down the telephone pole and the palms and the bamboo back there.

Realizing that I am taller than my banana tree without the peanut, I had to back up.  They were running on the outside of the plants back there instead of back in the brush, and I was concerned that they'd mistake my own self for a tree.

Luckily I was dressed in Blue, not Green.  Squirrels are not terribly smart.

Shrugging, I thought to get involved.   I clapped my hands loudly.

They stopped for a second.  Then I got cursed out in whatever Rodential Squirrelish Language that they use here that I am not aware of.

Back to it they went.  Running up and down the pole when one of them, the smaller of the two, ran back to the other side of the yard, up my banana tree, looked around then ran off into the distance.

Argument was over.  It was now about time for the drip-feed irrigation to stop for the day.  Today's Squirrel War had ended.  Who knows who was victorious, whether it was about a Peanut and Banana Sandwich, or whether anyone really cared.

Peace was once again supreme in my strange little yard full of constrained banana trees, Bonsai, and cultivated plants.  Rack got to my side, leaned into my right leg, and looked up.