Sunny Anderson Was Right, Low and Slow is the Way To Go when roasting Pork 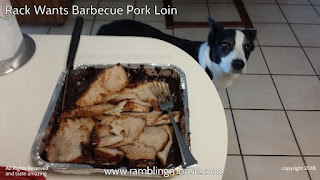 The recipe is simple.

The night before, marinade.

I used a half of a bottle of store bought Barbecue Sauce to 2 1/2 pounds (1 KG or so) of Pork Loin that was thawed.  Lets call that about a pint or a half liter of sauce.  Pick one you like, we won't judge.

Place all that in a plastic bag in the refrigerator and allow to sit overnight.

The next morning, or about 5 hours before the meal, pour your marinaded pork into a baking pan, uncovered, and make sure the marinade gets into the pan with your pork.

Cook until tender, however I cooked to 175F/80C internally and got THE BEST PORK I EVER HAD.


So that back story.  There's always a backstory.  And if you're looking for a recipe, you probably don't care, huh?


You see, Dad cooked Pork Chops when I was a child.  I could have used them to resole some work boots.

But that was normal back then.  You HAD to cook pork well.  There were parasites back then.  The rule was cook it well, and hope for the best.

Or so I remember from the bad old "analog" days back when dates started with a 19.  You know, when I was a kid, everything was black and white, and my pet was a house sized Triceratops named Trixie?

According to popular theory (word of mouth, maybe a lot of crap),  Pork wasn't a very clean food.  I suspect that someone in the back woods somewhere got sick and it became A Thing that you had to do.

Since then, The Pork Industry cleaned up its act.  So much so that the USDA has lowered the temperature that you cook pork to from 165F/75C to 140F/60C with a 3 minute resting time.

There are supposed to be no more parasites in USDA inspected Pork than there are in Beef, and that is at 1/3 to 1/4 the cost.

If cooked right, Pork Loin is tender and mild flavored.

So I have been thinking that I should get some of that pork loin out of the freezer and try again.  While I was planning this meal, I heard that bubbly TV Personality, Sunny Anderson say "Low and Slow! Low and Slow is the way to go!" over and over and over in my head.

I had tried making this recipe in a crock pot, and it was much better than Dad's Pork, but it could be better.

I wonder should I try Low and Slow in the oven?  Can I Do it?

I started researching recipes.  Some cooked low at 225F, some as high as 300F.  I settled on 250F because it seemed to be what the majority of the web pages cooked at.

That was the Low.  The Slow makes sense.  The longer amount of time the meat takes to get "done" the more likely that the muscle fibers will break down.

That's what we call "tender".

Since there was a lot of marinade and a lot of humidity in the environment, and the lower temperature, I did not expect it to dry out.

Barbecue?  I have a lot of recipes for this, but I wanted just to make it easy so I used a commerically prepared sauce I liked.  I do have a couple different recipes on this blog for

But I wanted quick and simple and I wanted something that I couldn't mess up by adding too much of something in it.

I dumped that half bottle in the bag, sealed it the night before, and cooked in a slow oven starting at breakfast.

The alarm went off on the electronic thermometer around 10:30 when the internal temp hit 165F.

But it stayed there for the next hour.

I was watching that temperature closely because I was basting this meat in Barbecue sauce from the pan every 30 minutes to an hour.

I poked that meat with a steak knife.

The knife went into that meat like it was butter.  Plunged right into it.  The last time I saw something like that, I was in a beautiful Polynesian restaurant and paying $26 for a Pork Tenderloin dinner that was perfectly and artfully made.

Mine was Pork Loin, a lesser cut, and this was as good as that meal.

I was able to hand slice that meat down into "Cold Cut Thin" slices.

The proof was in the tasting, this was awesome.  So good that Rack the SuperDog (TM) was hovering around asking for some.

Rack liked it too!

So Sunny Anderson, you were right, Low and Slow!

The Sandwich I made from that meat the next day was just as good.  I had a winner of a recipe.

Here it is, story and all, I saved it for my family, myself, and you all.

I am thinking this "process" should work on Beef Brisket as well, but that's a task to research for later.
Posted by Bill at 10:55 AM