Carnitas in a Crock Pot - Recipe

I'm a fan of Pork.  It wasn't something that Mom or Dad made when I was growing up.  I didn't even have Chinese food until I was 17.  Mexican food came around the same time, and it was what we were used to in South Jersey and Philly area at the time, the Tex Mex stuff that's easy to find.

Now that traditional Mexican cuisine is becoming more available, I'm discovering that I like it much more than the old Tex Mex that you'd need fire prevention gear to eat.   Savory but not spicy.

When I would go to a Mexican restaurant, I'd look for Carnitas.  Slow cooked pork with some seasoning that is typically served on a tortilla.  It became a bit of an obsession with me.  Scan the menu, look for Carnitas, and have it served, typically as a Tostada.

Since I have time to do this sort of thing, cooking Carnitas is a long time "Background" sort of task, I thought I might try to do it myself and look for either a crock pot recipe or a very simple one.  Found it, first time out.  "Right on one".

The recipe is dead simple.

Get crock pot set up.
Get Pork, I used tenderloin but traditionally more fatty cuts are used like Boston Butt.
Season Pork with a spice mixture used as a dry rub.
Set Pork in Crock Pot.
Pour Chicken Broth around the Pork taking care not to wash off the dry rub.
Press Slow and 10 hours and flip the Pork after 5 hours.

The recipe is promisingly flexible because we will be trying this one with chicken at some point.

I made this yesterday.   The house still smells faintly of a pleasant spice mixture that didn't get over-masked until I roasted some decaf for a friend just a half hour ago.

Remember, this is savory food, not what I would call spicy at all.

After it was cooked I sampled it and thought it was one of the best Pork meals I have ever made.  I wasn't sure if it was "Accurate" or "Authentic" since it was so simple to make so I brought over a pound of the stuff to my neighbor Lisa.  She said I nailed it and told me that since she already had dinner in the oven she was not going to tell her son Bill about it until AFTER dinner.  She wanted some for herself!


Mix above until Even.  I used a coffee mug and a teaspoon. 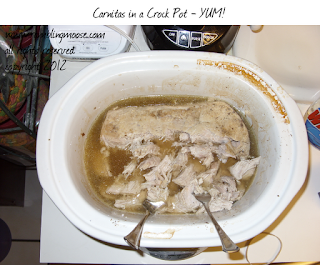