The Look Of Fear 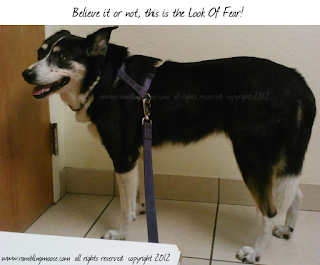 This Weekend I did a terrible thing,

I took Mrs Dog to the Vet.

It was time for her shots, her annual poke and prod and time for a general exam.

She didn't care for it.  You see, a Mc Nab Dog has a "Soft" Personality.   There are things she just doesn't do well with like, say, Personal Maintenance or generally anything outside of the ordinary.

That is to say anything outside of the ordinary is "Weird" and she doesn't like "Weird".


The preparation is simple.  Confuse her.  Get her all wound up and excited and tell her we're going for a RIDE! then stop off at the Vet's.   A Week or two early.  Mind you, I use an amazing vet.  They saved her life twice.  She had seizures twice in her life and was basically on life support for a couple days until she was able to shake it off enough to be able to come back home.   Then it was a month of therapy which consisted of me feeding her steroids and "walking" her by holding her up by the harness and letting her weak and wobbly legs do the rest.   The damage cleared and we're now into our third "Bonus" year.

It has left her afraid of the vet and probably rightly so.  All that happened and it's been a while, but she's not exactly a fan of the place.

I am a huge fan of Family Pet Medical Center on Federal Highway in Fort Lauderdale.  Dr Gonzales and Dr Glass are great people and treated all of us well when we went through all of that.  They're on Facebook too just like everyone is these days.

This year wasn't a big deal, it was more of her just being cranky.  After all we were returning to "The Scene Of The Crime".

Of course we had to get there an hour before the appointment could be filled.  We sat and watched the trippy TV that was trying to die, and she just wanted none of this.

I practically had to drag her into the waiting room, then when I sat down she became Vector Dog.  She'd try to be as far away from any other dog and as close to the door as possible at the same time.   Hard to explain that particular episode but believe me, an insistent 49 Pound Dog can figure a way to do that.

So we wait.   They had on the dog show on the TV that was dying.  It was giving me and the others there vertigo since it was weird trippy trails of color on the screen that sometimes settled down to a picture, only to get swooped away into another realm of trails of blue.  Consider it a radio program with two demented presenters.

When we got up to go in to the waiting room, she again was trying to squeeze through the door crack.  It looked so sad that I snapped that picture above.  She's putting on a brave face but none of us believed it.

When it came time for attention, our grumbling girl got the muzzle treatment.  Just easier that way especially since I use one of those cloth muzzles for her when I have to give her a bath.

I think what happens in those kind of situations where you're there and the dog is being prodded you can take two attitudes.  One of just let it happen, two would be get involved.   The latter probably makes things more complex and takes longer but that's what we did.  Who knows whether it helped her or not but it helped me get through that.

70 thousand mile/11 year check up all done, she's good for another year.  Three for the rabies shots.

Getting her home that day was a big change in personality.   All weekend she was glued to me like 49 pounds of fear fur.  If I got up to go into another room, she was there like a shot.   If she didn't notice me leave, it was going to be her obsessing until she sniffed me out.

Yes, she turned into a very loyal tower of jello.  That's not a bad thing, but it did mean that she had a weekend of finding where she could stare at me as she laid down and would fall asleep.   With her hearing going I came to the conclusion it was a toss up as to whether or not I should make a lot of noise for her to follow me or just to get up and do my thing quietly so she wasn't disturbed.

Not like I'm exactly the quietest thing on the planet, mind you.