Hypothyroidism in my old McNab Dog Lettie 3 weeks on

Back at the beginning of the month we loaded Mrs Dog into the Jeep and took her to the Family Pet Medical Center in Fort Lauderdale for her shots and annual checkup.  They drew blood, she was stressed but all in all if you're in South Florida this is the vet you need to have for your dog.

A couple nights later, I got a call from Dr Glass saying that I should come in tomorrow.  Mrs Dog had a "text book" case of early stages of Hypothyroidism.   It was common in an older dog and she'll survive well and may just rebound.  I went silent and took in the information, it was a bit much to take in at 845 when the dog walk was looming but we dealt with it.

Three weeks on, I've got a dog who has more energy back than I remembered her having for a couple years.  She has her will back too, which means that sometimes she tells me she wants the walk cut short by pulling me toward the house when we get to the end of a block.   I have a habit of walking her 3 miles a day, and sometimes she just doesn't want to do all that.

Her hearing had improved too.  In fact greatly.  I had given her hearing up for a loss before the appointment thinking that maybe the vet could help, maybe there was a clot of something in the ears that could be coaxed out but didn't really hold out much hope.   Oddly enough I was shown recently just how much better her hearing had gotten. 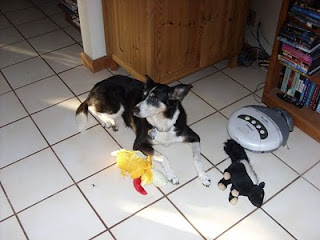 She has a couple soft toys, in fact outside of the nearly empty peanut butter jar or rubber kong we've got here, she doesn't care for hard toys.  Her favorite is a small green frog with a squeaker in it.  She tends to keep that palm sized thing near her mat when she sleeps and when it is gone, she'll look for it.

Wednesday I tossed it into the laundry with some things that needed the "Superhot Sterilize" cycle on the washer since it was starting to have a definite fragrance.

When I pulled it out of the washer, she was there, watching me put it in the dryer.

When it came out of the dryer she wasn't in the room.  Her hearing is better, not perfect and she hadn't followed me out immediately.  She was standing out in the kitchen looking through the laundry room sniffing the air that flowed through the house in the cool breezes that are here this time of year when I squeaked that toy.   She couldn't see me, but she did step into the room and sniffed the air looking at me.  One more squeak proved that she could hear that noise.

So today, my lazy old soul was half asleep and we tried the squeaky frog again.

Smart girl.  Decide if you want it when you're comfortable and your bones are telling you it's not exactly comfortable to move.

So basically she's on the pill a meal club for the rest of her days.

Her energy is better.
Hearing is better.
She is sleeping less.
She is acting like she is less achy.

I'm sure there are more symptoms that she's got but basically I've got "more" of her back now.   The benefit is that those little pink pills aren't nasty tasting and she just gobbles it down with her food.  None of that wrap it in bologna and hope for the best nonsense.
Posted by Bill at 10:13 AM