How it got to be Kevin Puryear's Bench at Pompano Airpark 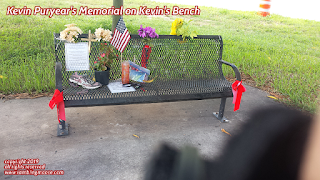 For me, the story starts well after things were in play.

You see, I restarted a regular habit of my own, then took it on the road.

I have started skating on a regular basis this year, and that meant I was going to Pompano Airpark.  I’d go, skate, fall down, and generally beat myself into a pulp while thoroughly enjoying the exercise.

I’m going twice a week, as early in the day as I can get out there, to skate a 9 mile workout. It is a great way to burn upwards of 1500 calories, and get some beta endorphins.

I guess being as big as I am, almost 7 feet on skates with helmet, the beta endorphins would soften my own appearance.

Going along on the trail, I’d have a big goofy grin on my face, while I am in my cocoon of music on the headphones.

I became a regular. People would recognize me, smile and wave.

There was one person in specific who hung out at the 1.5 mile water stop.  It’s a small stand of shade trees surrounding a water fountain and three green metal benches.  Since the park really needs more water stops, this stop became a bit of a hangout.

I noticed as I was skating by, heading past the big Goodyear blimp hangar, there was one person curiously asking me the time.

I’d be confused as he was generally very friendly even if his outward appearance was on the rather scruffy side and led me to believe that he might be homeless.

As I’m going through this year, I’m testing out old equipment to prove that I can continue to use it, or that I should “retire” it.  Trust me, skates don’t age well, and my newest pair is over 15 years old.

One of those test workouts, I had to stop at that water stop.  By that I meant I was in desperate need of a rest since the skates being tested had me burning almost twice my usual “burn rate” in calories.  I was exhausted.

He was there.  Still pleasant as usual.

I got my drink and he waited.  As soon as I had finished “Is it 9 o’clock yet? You enjoying yourself?”

“Oh yes, I am!”  I fibbed, but people never want to hear bad news.  After all my third wheel had swollen and was forcing me to take way too many rests than usual.

I guess I had made a new friend.  Every time in the future, I’d hear him cheer me on or shout a loud Hello! as I passed.

This was what he did.  He would hang out with the people working out at the park.  Some more athletic than others, always greeted by him.

I grew to expect to see him there, then grew to look forward to him.  He just was there, being pleasant, sitting under the trees, never threatening, just enjoying being there as everyone would come and go.

Later, usually late morning, he’d wander off.  I never saw where he went to but I figured he had another place to go and more people to see.

Local Color is what I call something like this.  Someone who does something unexpected that brings a bit of character to the area. 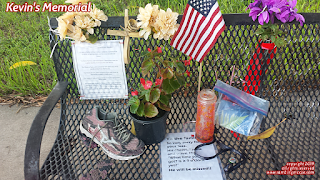 I realized after a while that he had gone missing and I didn’t know why.  My mid lap greeting was gone.  Since I tended not to stop often at that water stop, I never learned why.

Except one day a small memorial cropped up on his bench.  Right where he always sat, closest to the trail on the southernmost bench.

The story explained that he had been struck by the Brightline train on June 10, 2019.  His family had invited everyone to his service and his funeral to say goodbye.

It turns out that he was an uncle, a brother, and a friend to his family and they said he will be missed.

I was telling this story to my own family the other day and realized that yes, he would be missed.  I missed seeing him there on what I had taken to calling Kevin’s Bench.

It is now two months after he died.  The little memorial is still there.  I still look every time I pass there.

Kevin has gone, we at the park still remember.

You never really know who you touch in life or how you effect others by your actions.

Sometimes those effected don’t realize that they were until you've gone. 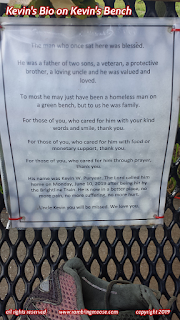