What Are Fridge Bread And Butter Pickles And Why Haven't I Tried This Before Now? 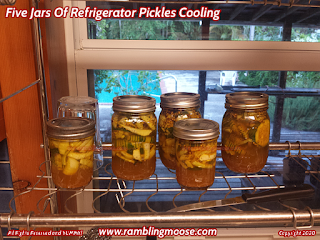 I am on Day Three of letting this brew in the fridge.  Opened one jar up and started nibbling.

I finished the Jar.

They Were THAT Good!

I think the answer to that is my father.

Being from a German family in Easton Pennsylvania, he always loved to have Pickles.

One day I tried them.  YUCK!  His pickles were salty and strong, garlicky and overly peppery and spicy.  No thank you!

I got well past that, never willingly had another one until I was well past my teens.  I then tried what they called a "Bread and Butter" pickle.

They are called that because people during The Depression had plain bread with butter on it, put pickles on it, and called that a sandwich.

Luckily we have better these days since that is just carbs and fat.

Even though we do, these pickles are well worth the hour it took for me to make five jars of them.

This is from the gift that keeps giving.  Ann, down the block, asked me to help her clear out her fridge and gave me a big ol' bag of fruit and vegetables.  The Apples were made into an Apple Pie.  The Carrots I snacked on.  The Oranges are split between me and Oscar.

And two Cucumbers.   I was low on pickles, and remembered my Cousin in Nebraska makes these all the time because "These are so darn easy!".   I think he added a "Go Big Red" after it, not sure.

So I tried.  It's basically Mc Cormick's recipe, so if you can't understand me, try there.   I did add a teaspoon of Celery Seed, a half teaspoon of Ground Cloves, and a teaspoon of Turmeric.  Consider that last bit optional.  I subbed in a whole white onion instead of using the 1/2 cup of dried onions because I had the onion.  I rather liked that pickled too! 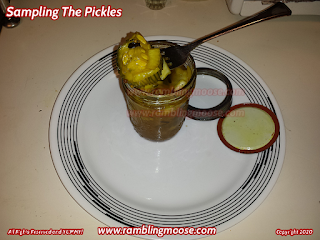