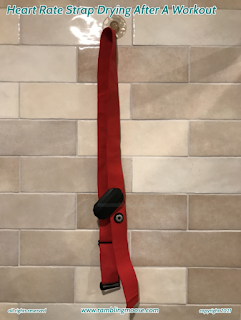 I have four sports that I am involved in, none of them involve going underwater or climbing into the atmosphere.  If you do any of that, you're not going to be able to use this dodge.

Since I am a ground pounder, or more likely someone who is on wheels, when I workout, I have different needs than those who isn't.  Living in South Florida, there are plenty of opportunities to go out and swim.  Pools, the Ocean, the reefs.

I never really found all that attractive so take what I have to say with a grain of salt.

When I moved out of the house as a teen, I needed to shed weight.  I got into nutrition, weight lifted, walked miles, and begun running.  By the time I graduated college, I had dropped 75 pounds, and got light enough to begin distance running.

Back then the only thing I really needed to know is how far I would run.  I was not a racer, I had not been timed since I was a child in Elementary School.

Moving to be near my job, I found I could run at Valley Forge National Park in suburban Philadelphia PA.  The workouts got longer, I needed some entertainment.  I brought a pocket shortwave radio and was able to listen to the BBC.  Yes, I was running on the encampments of the Revolutionary War listening to the British Broadcasting Corporation.   The irony was not lost on me.

But run I did.  One lap was 10Km.  I would do that 10K three times a week.  The shortwave was joined with a bottle or two of water.

Later I got into Biking and then Inline Skating.  I could judge how I was progressing by using distance but my speed was variable.  So I had a watch.  The trails were always marked and I could get a rough speed by the old standby distance over time.

But how hard was I pushing myself.  That was when I got into the whole sport watch thing.  I had an old Polar that was enough.  A Stopwatch and Heart Rate Strap and I was golden.  I could watch things change as I was rolling or running along.

After a sprint around the park, check the average heart rate (183) and the peak (204) and yes, I was pushing myself hard.

I've always been told that I workout at at 12 on the 10 point scale.

But the needs change.

It turns out that I could get money back from my health insurance if I report back regularly.

What I needed was a heart rate monitor that talked to the phone at the very least.   I started looking around for something "Bluetooth".  There are a lot of heart rate watches that do calorie count estimates based on the magic of Math, but were they accurate?

There was also a strap that fit around the chest and reported back to the phone via Bluetooth that was a good fit.  I had a generic heart rate monitor that I found for $30 and connecting with some of the software suites out there for exercise like Strava and Runkeeper, I would report back to the health insurance company and get a few pennies a day.  Strava to share workouts with family, Runkeeper to tell me what I was doing at this minute through the headphones.

That is now around $10 a week.  I paid off that heart rate strap and wondered whether the watches would work.

I'm not convinced that they do.

The watches will talk back to their own software that will talk to the phone and report back to the insurance company.   Since I listen to music while working out, I have to have something, and there's just so much more music out there on streams than you can ever hope to listen to, the phone is already coming with me.

A Watch is just more hardware to cart along.

Runkeeper is even telling me what my pace, heart rate, distance and other statistics are through the headphones.   Either software will give me instantaneous distance/speed/location.  I get a map that is accurate to within feet using GPS.

So what did I learn about the watches?

Why is that important?  The sensors on a watch use light pulses through the skin to report back to the watch.   Having used a watch that used that technology, I'm thinking that for anyone in a workout that gets sweaty or wet, it is pointless to use that technology.

Sure, it is getting "Better" but that heart rate strap that is around my chest is spot on perfect.  The watches won't even read my heart rate correctly if I am sitting in a chair watching the television at night.  The chest strap is doing some magic running some electronics through your chest.  It requires sweat to keep contact with your body so it's strength is the weakness of those $30 to $900 watches that use LEDs to scan your wrist.

So for now, looking for a deal on one of the high end watches online is a hobby and I'll stay where I am.  If the runner who is down the street ever decides he wants to shed some of them, I'll give it a try but my cheap cobbled together solution of free phone software and a $30 Bluetooth strap simply works.

If I ever need a diver's watch, I have an old school automatic mechanical Seiko on my wrist that is Buy It For Life quality that will do for dive timing.  Climbing a mountain?  Different story, I'll climb that hill when I come to it, and do so in low gear.

I wonder if my adult nephew will want it when I am gone?  It's a damn good watch even if I bought it in 2003 and the red on the timing ring is faded from the pool in the back yard!