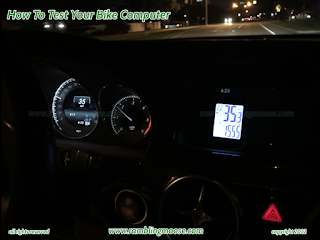 "Go Ahead, You already have the bike and you're climbing the walls from the injury..."

It went on from there.  I had finished an inline skate marathon, my fifth, and then broke my collarbone.  Again.  Second time on that one.

My doctor, my friends, my Orthopedic Surgeon benched me.  Again.

Into the healing process, I was told by the Ortho, a very good one truth be told, that I can begin to exercise again.

More like "I can see you really want to get started again but no skating ... yet."

A back and forth and he said "See if you can bike".

With admonishments to "Be Careful for crying out loud!" from him, and everyone else, I started to bike.

Now Back In The Day when I was a sponsored inline skater, the Bikers were a problem, to put it kindly.  They resented anyone on THEIR trail.  Shaddap, ok?  Besides little man-child I'll throw you and that toy you are zooming around into the Schuylkill River...

I'll tone it down, that was a generation ago.   I got the dusty old bike out of the shed, tuned it up as best I could, and got back on the thing.  Oh sure, I did it, but I felt like I "Let Down The Team".

But I got better at it.  Then I realized I was overpowering the bike.  I got a new bike because the old one was hurting my knees and having gone through sports medicine training and rehab, I surely did not want to do that.  I knew the symptoms intimately.

"Besides, knowing you, you will want to build the thing to fit you."  I was told.

I briefly considered building one from scratch, ordering parts and wrenching them all together.  No, that would be too complex.  The technology of bikes had changed as much as had that of Inline Skating.

I can give you chapter and verse on why you want a Ceramic 608 bearing on your skates instead of steel, or at least a Hybrid Ceramic, and where both fit in the pecking order.

I could not tell you a bit about how to properly adjust a derailleur, let alone install a front, a back, and route cables.  I had to leave that to the pros.  Here I am six months together and I am still getting things "settled" on that bike. 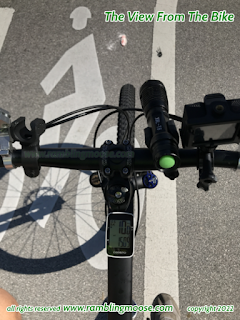 Complaining about that process got me "You are handy, figure it out, besides, you will want to get some things for the bike anyway, so work up an order."

Yeah well right.  Mirrors, lights, clamps for flashlights, seat, mount for the GoPro, travel bag with more lights, mounts for thermos bottles.  Yes everything was plural.  I had about as much light coming off that bike as I did my old Motorcycle.

Summer I biked.  Too hot to do so after sunrise, this is Florida after all, I basically lit the road up with a Lane Finder light plus twin headlights.  All before dawn.

When I was given the all clear from the Ortho with "Go live your life", I started skating again, but kept the cycling.

My sport watch and heart monitor told me all this cardio was helping my resting heart rate drop into the mid 50s.  Not bad...

As I was riding I wanted to know how fast I was going so I would look at that watch - and veer into traffic lanes.

I needed a bike computer.  I needed to know my speed while going.  Runkeeper synced up with the sport watch but I know my own athletic prowess well enough to know that when the little man on Runkeeper was telling me that I was biking at 18MPH, and my heart rate was 72, he was wrong about the HR.

The bike computer arrived and since I wanted it only for my speed, I did not need a connection to the bike itself.  GPS is quite good enough.

Since the bike computer attached to the frame of the bike with neoprene "rubberbands", I disconnected it and told the story to those around me.

It was Sunday, I was going to break training since I had ridden a nice solid 20 miles.  Burned off anything I had for breakfast and lunch, we could do anything we wanted for dinner.

Yeah well just not when I have caffeine in me.  I'm intense enough with caffeine and sugar feeding off each other.

We took the little bike computer with us, turned it on and set it on the dashboard.  The car had a digital speedo on the dash, and my computer sitting there.   They weren't perfectly in sync, there was a lag on the bike computer but it proved to me that they were accurate.  Within a few seconds.

When we got the ice cream, super premium soft serve with caramel, whipped cream, peanuts, and a cherry on top, the computer sat there and powered down to a rest.   Just as expected after fifteen minutes, it considered it enough time and the display went dark.  I turned it back on just as we were leaving and the workout was still in progress.

So we did a tour of Fort Lauderdale, the industrial area around the Airport, up to the hospital, and through downtown to the house.

I had a winner.  I also figured out that the computer was accurate, enough, for use.

While I am flying up and down the main street in my town, I can glance down and see that the numbers are changing.

In fact the only quirk I found was that when I peaked over my speed limit I set of 20 mph, the thing beeped at me and told me that I was going 32.4kph.  Doing the math in my head, it's a programming error on their part.  If you select "imperial measurements" everything should be in imperial.  MPH, feet, inches.  Meh.  I can live with it.

I set the speed limit higher.  The only speed limit I break is when I bike through the school zones.  15mph is about where I cruise when I'm taking it easy.

Better off that I am biking later and that school zone limit is not an issue, huh?