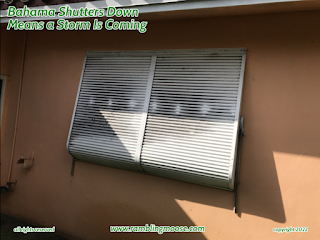 My own theory of Hurricane Prep is pretty simple.

Do it every day.

No, seriously.  Why keep putting junk piled on the ground in the corner?  Why let your plantings get out of control?   Oh and if you are in an area where the power goes out, get a generator.  FPL Sucks.

When we moved here to South Florida, we knew that this area will get hit.  I sat in my house on top of a Hill in Philadelphia and watched as Katrina inundated New Orleans, as Wilma went across South Florida as a back door storm, and I remember driving over the area that Andrew hit in Homestead in the 90s.

I was driving to the Florida Keys to Key West about six months after the storm hit Homestead.  Really, truly, freaky coming to a stop sign where a stop light should be and seeing the street numbers painted on a street where there were no houses for blocks.

You really don’t want a storm like that hitting you.

It could have.  After moving here, I have been told many times that “Andrew would have hit here if it weren’t for a last minute wobble in the storms track”.

So I put down my shutters on one side of the house.  I also threw Aunt Betty’s plastic furniture into the pool.  When she was closing up her place in Century Village to live back in Noo Yawk on Lawn Guy Lant, she made sure that I took it.  I’ve had it on my porch ever since because it looks good there.

She made me promise to keep it clean for her and a dip in the pool twice a year does that well.

At this point, on Tuesday, the storm is supposed to make landfall as Hurricane Nicole around Fort Pierce on Wednesday evening.   They are saying that the wind field is extra large and will give us Tropical Storm Force Winds as a result.  It has been a day since I started puttering around on all of this including this blog, and the track has not changed.

I went through that with Hurricane Irma.  It was not a big deal here, 66 MPH winds with 99 MPH gusts.  I sat in this chair that I am writing from and watched the big tree across the street, 30 feet tall, sway in the breezes.

10 meters of Florida Native Tree that needs to be trimmed survived the rain well.

As time went on, we replaced windows with hurricane glass, replaced the roof and brought it up to Code – Miami-Dade code.  The house is a bunker now and we get a preferred rate on our insurance as a result.

If your home is in the cross hairs of this storm, good luck, just go and pick things up since it’s too late to put up a new roof.

But yes, the main thing is really just hoping it hits your neighbor and not you.  I’ll be watching my neighbor because his house is nowhere near as well built as mine.  If his roof ends up anywhere, I hope it is not on mine.

I’ll let you all know how it goes, a Tropical Storm force wind is strong but survivable.   I won’t get worried until I start hearing Category 2 or 3 or that train sound that says there’s a tornado approaching.  Tornadoes are a very different beast as my cousin in Nebraska will tell you.  The first few minutes of the Wizard of Oz before it turns to Technicolor… yeah well different story.

In the mean time, if you have relatives in Florida, check up with them.  I’d say Saturday will be soon enough.