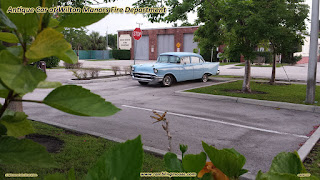 Every town has its quirks.

Wilton Manors has them too.   Mostly the inhabitants of all sorts, but once in a while you see something that leaves you asking what on earth is going on.

Square in the middle of town there is a restaurant.  There was a restaurant before it in the same spot.  It was a greasy spoon chicken wings joint that moved just out of town.

That's great if you like that sort of thing.  I can make my own greasy spoon chicken, thank you, and I prefer barbecue or grilled at any rate.  Much better for you, or so they say.

As the old building rotted, someone came along and did the typical Screw The System Building Rehab.  Knock down every wall but two, then build a new building around it.   That means it is a rehab, and therefore not new construction, and the laws are less strict.

Not good for those of us around it.

The restaurant that later inhabited the space, to this day, is a sushi place.  All painted in purple.

I'm not a fan of eating raw fish in a Barney colored restaurant blaring bad rock music from twenty years ago, but maybe you do.  I'll leave you to it.

Squatting there like a big purple carbuncle, it does draw your attention.  It is hardly ever "full" so if you want a meal and they are open go on in.

See, that's the thing.   Right now, it isn't open.  It's closed.  They have a sign taped to the front door that explains that they're doing some remodeling or some re-menuing of their food.  Bottom line is that it has been even emptier than it had been before.

Maybe they will open again or maybe someone will buy the place and hopefully banish Barney and paint the place a different color under a new format.

I love you,  You love me, Why not have some Broccoli?

As the place has been closed for about 2 or 3 months now, maybe longer, it has collected a few cars.  They were strategically placed to block the parking lot off from someone borrowing it and maybe making it look like it is actually inhabited with say a car club.

Ok, I'll say a car club.  Because the cars that were left behind aren't junkers.  I suspect that the city here would have something to say about that.  The cars are almost always what could be considered classics.

This car parked there caught my eye and forced me to think about it.   It's a somewhat restored 1950s Chevrolet.  In baby blue, it also is Indifferently restored.  The back deck of the car is stained with age.  The paint seemed to have been done badly because it was a bit rough in appearance.

And the car had a flat.

Not just a flat, but the wheel itself was ground down leading you to believe that it had been dragged across the pavement to rest where it is over the final few feet.

By a giant purple dinosaur perhaps?  I doubt that, but the love that Barney would give to that car would be to put on the spare tire, I would hope.

1950s cars are rather rare now.  They've mostly gone into the hands of collectors.  They generally aren't used to decorate parking lots with 1980s Corvettes, last century bucket trucks, or some of the other automotive relics that have showed up over the last month.  Always three vehicles, one to block each entry, and that sad semi restored baby blue Chevrolet that was there that day and this morning still.

We saw it that day.  Me, my dog Rack, and a rather nice looking tortoise shell winged Dragonfly balancing on the hibiscus hedge that is well maintained and intended to protect the property from Purple Dinosaurs.

So if you go by, you may be able to witness the worlds slowest car club.  Join the Dragonflies, and the other quirky denizens of this town.

You just won't be able to get sushi, unless you bring your own.

Even better if you bring a purple dinosaur and drive up in an antique car.