How Much Chocolate Is Too Much?

When someone near to me came home from London, he brought me something that I appreciated very much.

I just did not know how much?

I mean... this is apparently a "Thing" in Britain.

By which I mean "Supersized" chocolate bars. 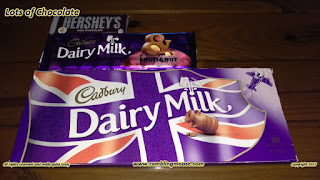 I am laughing at the display on my room organizer right now.  This is ... ridiculous.

But it is a "thing" there, and the reality is that there is the concept of a reasonable amount of any given food to eat.

Really, this is huge!  The sheer size of it has me laughing.

Way up at the top of the picture is a "standard" single serving Hershey's Chocolate bar.  It's not my favorite chocolate by a long shot, but here in the land of Big Food and Cheap Food, it's what we think of as a single serving.

Granted, it is 220 calories which is a bit large for some of my more petite friends to have in one sitting.  I have a friend who is 1/2 my size and weight, and that 1.55 ounce, or 43 gram serving is what should be about all she should have of candy or dessert all day.

My being twice that size I'm maintaining weight with twice that amount per day.  I lose a pound all week, gain it back on the weekend, and I have since High School.  It's in balance.  My doctor had no complaints about my weight or my fitness level at all.

Training Diets are 1 gram protein per pound of weight.  Lower Fat and Carbs as needed.  Good luck with that.

Nutrition guidelines aside... that little bar is a "single serving".

Now, since what we get here in Los Estados Unidos with the name Cadbury doesn't taste right to me, I have a standing order with anyone going to England to bring back Cadbury Chocolates.

It used to be that Cadbury was made by Hershey by license.  It also does not taste right to me, nor the same.

Close, but not quite.  Kit Kats are the same too for me.  I could be wrong.

Could be the water, or that the chocolate is different.  I don't know.  When I have a Cadbury branded chocolate here I don't think it tastes "right" to me.  My opinion.  I'd just rather get Cadbury imported from Old Blighty than walk down the block to the rather excellent candy store and get a bar there.

Maybe I should.  Just not today.

That and my licorice allsorts.  Bassetts.  They're stale if I get them locally, but amazing if bought at the airport at Gatwick just before you leave.

Please Exit the UK via the Gift Shop.  Don't forget your Licorice and your ridiculously large chocolate bars!

So I am getting enough from other sources.

And don't get me on Your Country Should Go Metric.  We did, it's just we have a translation layer there so it makes things easier for us.  All our units of measurements are defined as a multiple of Grams or Liters or what have you.

Maybe you shouldn't have a license plate for a candy bar.

Seven.  And that is the middle sized bar.

When I first saw that bar I thought it was insanely sized.  Why?  Because I know people who would attempt to eat the whole thing in one sitting.

Don't do that.  Nearly a day's budget of calories for a tall woman in one bar of chocolate is insane.  Just Don't Do it.

Well, at least that's the math if I can read the British Nutrition Label.   They suggest a more reasonable serving size of a little more than an ounce.

While people in Britain are smaller than in some parts of the US - Buddy, you folks are catching up.

But that fruit and nut bar that I truly enjoyed massively was a shock when I saw it.  Ok, "Gift Sized" was what I called it.

What about that plank of Dairy Milk in the box.  On the bottom of the picture.

Yes, I know, Portion Control.  I've been doing portion control for so long that I can estimate calories in my head - and do.

When I saw it I asked "What the hell is that thing, is it really chocolate?"

Yep!  I am laughing at the massive bounty of chocolate that that is.

Real good chocolate too.  The way a Cadbury Chocolate Bar should taste.

And yes, I will enjoy it, completely.  Every last gram.  But I will "Do The Math".

Serving size according to Cadbury is a measly 25 grams or 132 calories.

I'm laughing at that.

No wonder why the NHS is moving to disallow hospitals to sell these on premises.  I would say that the heft and size of the thing, it could be used as a weapon.

So I guess the whole supersizing thing that we went through here, they did in Britain, differently.

Good luck folks, I'm still laughing at the bar being so bloody large!

At least I have until December 2018 to finish all this stuff!

I'll go with a roughly 200 calorie serving and enjoy each bit.  By the time I finish all this stuff, this "table leveler" block of chocolate, someone else will be going back to England and coming back with a ludicrously large bar of chocolate again.

It will be appreciated.

Six Chunks at a time.  I just want to watch the world burn and have a wee bit more.