The Original Pizza Story and The One Ingredient Pizza Sauce

There is a story I was told, time and again. 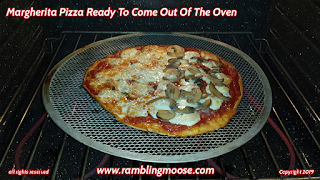 When the Allied troops were fighting the Nazis in Italy after the fall of Mussolini they eventually approached Naples.

Due to the Volcanic Soil from Mount Vesuvius and other volcanos, the soil there is extremely rich.  The climate in the area is perfect for growing tomatoes that are held to be better than anywhere else.

(Ok, maybe AS good as the home grown tomatoes that are from South Jersey, but I digress.)

However, due to the impoverishment caused by the Fascists and the War, there was very little to go around.

The troops came upon pizzas made with only about four ingredients.  Crust made from Flour, water, yeast and a little salt.  Mozzarella made from milk from the few cows that were left.  A simple red sauce made with those tomatoes and almost always a touch of basil.

Yep, that's it.  A Margarita Pizza.  Or however my spell check forces me to spell it.

(I have seen it Margherita on Menus as well.  The picture is labeled like that, the article uses the other spelling.)

It was a hit and brought back to the US and became a favorite here and worldwide.

Mind you, to me, pizza made with Pineapples or Cheddar Cheese are an abomination, but I am quite fond of Mushrooms and perhaps sundried tomatoes on occasion.

A week or two ago, I went to downtown Miami and went to what was an Italian restaurant.  They had all the prerequisite items on the menu and a simple Marg(h)erita Pizza in their wood burning stove.   I got that and it was excellent.

As I sat there I was pondering the sauce with my lunch partner.  We decided that if there was anything more in that sauce than a little basil and San Marzano Tomatoes, we couldn't tell.

San Marzano Tomatoes are the name for the "DOP" for that area - The Protected Area.

So we got a can.  I used a 100 year old potato masher and mushed them down to a chunky 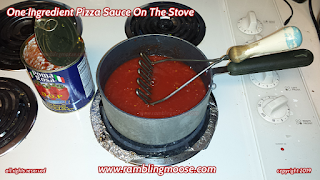 Then I turned the heat onto medium low and cooked them down for 90 minutes.

Allowing the sauce to cool and rest until the next day, because tomato sauces are always ALWAYS better "tomorrow", I waited.

I made the pizza you see in that picture.  It was almost identical to that $16, Serves One, Pizza.

We cracked it.  Simple is best if you want an Authentic Pizza.

Mind you, I will say that Neopolitan Pizza in any of the major NE US Cities is supposed to be better, but this was an awesome pizza with a no fuss sauce that I would put up against anything I've had elsewhere.

So much for artisanal, you can be an artisan too!