How About a Non Poisonous Weed Killer Instead Of Round-Up

That picture is the whole recipe.  Borrowed from Facebook, so, thank you whoever you were!

I do however mix mine in a gallon jug so I cut it by half and then pour it into my sprayer.

It works, in fact it works well.

The Con is that it does not persist - it doesn't kill the weeds "permanently" like Round-Up Does.

Or rather that is the Pro in my view.

Ok, so here's the deal.  If you own a property and you get weeds, you have used Round-Up or a similar product.  Spray it once, it kills the weeds effectively.  They stay dead for a long time, months.

There is a lot of controversy about that stuff.  Some Say it is carcinogenic.  Some say that it remains in the environment for years.  Some Say it causes mutations.

I am not certain whether any of the negatives that Some Say about Round-up are valid, I'm just uncomfortable with using something on my soil that I don't want on my body that works quite that well.

This stuff kills MOST weeds.
It seems to work for a bit then the weeds come back or perhaps it is different weeds that come back in its place.

Not sure but I will say that I feel a lot more comfortable treating the soil with this stuff.

It is Vinegar, Epsom Salt, and Soap.

If you use it constantly on the same spot, it will damage the soil just like any "waste water" would.

In reality, you aren't going to use it that frequently or in that concentration.

So lets call this "Safe-Ish".

Safe is water, only, on your plants and your land.

I have used it very close to some food crops I have here.  Some Basil and some Green Onion I have in the front garden were close to where I spray and I won't have any personal issues with eating those when I feel they are ready.

The picture is after treatment, so you can see that it is effective. 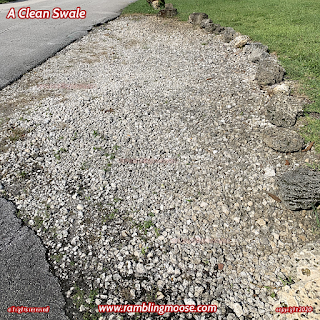