Birthday Cake Saga - How Not To Make Black Icing

Ok, the last two days, you have heard the recipe.

Specifically I had a weird idea that this cake had to have Black Icing.  If you read some other blogs like Cake Wrecks, you will know they have a strong distaste for the stuff.  Black Icing has a nasty taste usually, it does weird things like pass through your body pretty much intact, and it is notoriously difficult to get right.

Kevin had already gotten his AARP Letter, as you would have expected, and he wasn't too happy about being marketed a membership to a group that is a pressure group for senior citizens.  The man still has a lot of life left in him.  50 is the new 30 now anyway so he didn't really want to hear about it all....

Back to the icing.

The night before, while the cakes were cooling on racks, we went out to get some pet food for my parrot, and came up empty.  Walking from the pet store to the Publix supermarket next door, we then looked for food coloring.  I had seen plenty of it before, and this was a large Publix.  Unfortunately the rainbow of food color that they had did not include black.

We left empty handed and went to the local craft supermarket, the Pearl on Oakland Park Boulevard.   Getting there we were greeted with "Hello Pearl Customers, this store will be closing at 8PM in 15 minutes, please make your selections carefully".

Marketing speak for "Get it and get out" I suppose, so we went on a hunt.  I had told him what I had in mind, and with a cringe he knew he had better come along.  It turns out that Cake Decorating in the home isn't as popular as it once was.  Who knew, people still bake at home don't they?

Ok, I guess SOME people do, but not as many as there once was.  Politically correct descriptions aside, we asked and found out that Pearl was discontinuing their cake decorating supplies and what was left was "Over There".

Over there was back in the back under the stairs and rather dusty.  I did find some Black Candy Coloring as it was described and bought it.  At that point I had an evil look on my face, and a sheepish Kevin padding along beside me as we left.

The next day, I made the icing, and it turned out perfectly white.  That wasn't what we wanted, was it?

I began to add the coloring a drop at a time.  That didn't work.  You see it takes a LOT of coloring to make a cake look something approximating black.  I would say it is more like gunmetal grey but it worked.

It also was very messy.

Some of the stranger places I had found black food coloring finger prints were on the wall in the bathroom, the front door knob, the TV power button, the remote for the internet radio.  The stuff stained my shoes, and it got on my clothes. 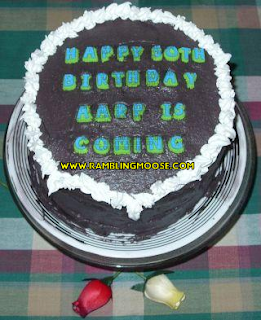 It is today, Wednesday.  I made that blasted icing on Sunday morning, early.  I STILL have the stuff under my fingernails. It is fading, to a deep blue so it doesn't look like I was arrested and sent in for fingerprinting any longer at least.

Ok, so Jen at Cake Wrecks is definitely right, Black Icing should be avoided at all costs.

On the other hand, I had a request to get a picture of the cake with Kevin ... that story will be saved for a later time... I've got some fingerprints to clean!
Posted by Bill at 10:13 AM