Anytime you live around someone, you learn their quirks.

Sometimes you get more quirks than not.  Sometimes the quirks can be thoroughly entertaining.

Shopping for dog toys can be a trial at first.  There are some stores that will allow you to take your friend inside and explore.  First you pile the furball in the car.  No, not you or me, but the dog.  Maybe the cat too, I wouldn't know about cats since I sneeze when I'm around them for any real length of time.

All those who wander are not lost, and when you have a dog like mine, merely getting into the Jeep is a treat!  Taking a short drive to the Gas Station and paying obscene amounts of money just to get down to the shops can be sheer pleasure, and driving to a proper destination is ecstasy.

When you arrive, walk on in and wander the aisles.  Handle the loose toys, your dog will get excited over some toys, and ignore others.

It was that process that I found that my Lettie loves plush toys.  She's much more gentle than I had expected with them, some of these toys are over 5 years old and have survived many trips from mouth to washer.

Going to the big box wholesale club was a pleasant surprise because for the price of one plush toy I could find a box of three.  Her favorite toy has long been a plush grey squirrel.  It could be because she would tear out of the back door, navigate the two right angle turns and "herd" them out of the yard.

If those squirrels were any slower I have a feeling she'd have one in her mouth just like the plush toys.

The good ones have squeakers in the tail and the body, and biting down on them gives a loud squeak.  It stimulates the prey drive and the instincts kick in.  She'd flip the thing around back and forth while holding onto the tail and knock herself dizzy as it happens.

When I found that box of three we had an assortment of toys, all with electronic noise boxes in them.  One was an armadillo which she didn't like because she couldn't grip it.  When she'd drop it, it would make an odd screech of a sound.   We didn't think that an armadillo actually made sounds but it made the toy better for her.

Once she decided that it wasn't her favorite and had crushed the noise box beyond all recognition, I removed the box, picked up the fluff and let her finish with it.  It mysteriously made it to the trash can later... I have no idea how.  Hmmm...

The deflated armadillo was replaced with a skunk that did the same screech, and she liked that since the toy was similar in size to the departed squirrel and had a tail.  It lasted around a year. 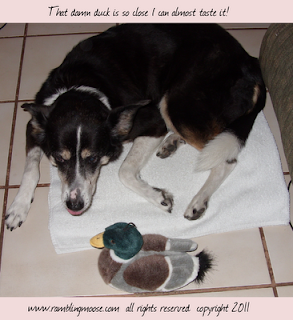 All this time there was one toy she was not allowed to have.  I kept that one for my own.  It was a Mallard Drake that had a noise box that was a pretty accurate sound of a duck call.

Squeeze the duck's back and it would let out a QUACK! Quack Quack QUACK!

Lettie wanted that toy, but since she's a rare creature, a Mc Nab Dog that respects boundaries, she knows it was NOT her toy and would leave it on the headboard of the bed where it ended up.

If you watch TV for any length of time, there are all sorts of animal sounds and weird mechanical noises that will sound distantly like a duck.

I noticed that if there is a duck call on TV, she'll perk and walk over to the duck in the bedroom to make sure it is still on the headboard, two years later.

The battery is almost dead in the unit so I will have to open it up to replace it, but anything that squeaks or makes something roughly like a duck call and Mrs Dog goes into the master bedroom for a search.

Since I almost never watch commercials, it is a rare thing when I see an Aflac commercial, but that loud call from Gilbert Gottfried would get her going.  "AFLAC!" and she'd run out to the bedroom.

Watching the Addams Family was always fun because she'd get up at the beginning and the end.  That old black and white show from the early 60s had lots of wild and wonderful sound effects that distantly sounded like ratchets and duck calls and she would have to check.  It was one of the few shows she wouldn't sleep through because she'd be in that bedroom a couple times in the roughly half hour it was on.

Sound effects in an intelligent dog are just like ringing that bell in the experiment by Pavlov.  His dog was trained to salivate at the sound of a bell.  In my case, I suppose I will have to give her the duck, but for now I like it where it is... On the TV, and on the Radio, and on the headstand of the bed.
Posted by Bill at 10:13 AM