Purple Grass in the Park 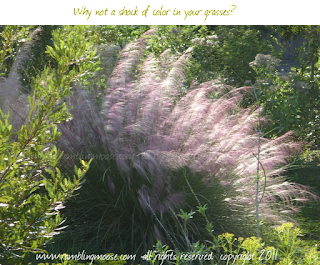 The day after going to a lecture on the native species that were planted in the local M.E. Depalma Park, I got to thinking.

Typical yard plantings are basically hedgerows.  Mowed grass cropped close, hedges and flowers along the property lines.  Depending on where you are, it's going to be the same thing over and again.

The problem with that is that a lawn does not lend itself to the ecology.  They are expensive to upkeep.  Think of all that water you pour onto them, all of the effort you have to put into them to mow, the gas, the pollution, fertilizer that leeches into the water table.

Every so often you have someone who has decided to step away from the lawn and do something different.

Different means that you're on your own.  Many cities won't allow you to simply stop maintaining your yard - with good reason.  On the other hand, slowly converting your yard into a meadow of wildflowers has been done.   Pennsylvania, was a leader in this.  What they did was to select areas to start with to do something different.   They removed the existing grass and planted in those areas a mix of wildflowers that would bloom at different times of the year and reseed the area for next year.  It was so successful that many cities and other states followed suit.  You can now get cans of wildflower mix and scatter them in the hopes that you'll have a yard of blooms instead of weeds.

Mostly that can is native or naturalized species and will do well with minimal care.

All those thoughts came to mind when I walked through the park the next day.  Some of the plantings are so successful that they're encroaching on the sidewalk.   When you have something that is perfect for the conditions, that is what you get.

In front of my house there's a tree that isn't doing so well.  Parts of it got "freezer burned" last year when the temps hit one degree above freezing.  There were snow flurries spotted in the town North of me, Oakland Park.   It was surrounded by some rather nondescript Liritrope grass that did nothing but look uniformly green.  As it was patchy and some of it was edged out by some more vigorous weeds, I was wondering what a little color would do for that spot.  At that point my mind came back to the grass in the picture.

Yes, native species can be beautiful if not spectacular.  They can also replace something bland with something quite easy to grow that gives a shock of color just where you need it, under an old tree.
Posted by Bill at 10:27 AM