The Story of Santa Clothes and the Lump of Coal 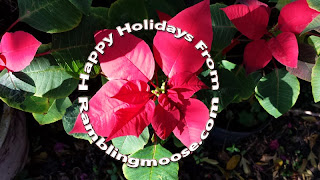 A comment flew by me this morning that tripped a memory of a while back.

When you are a kid, one of the things you want the least are clothes for the holidays.

Oh sure, you need them, but they're not exactly exciting.  At least now.  I remember an old picture of right after World War 2 in the rubble of a bombed out building, there was a child who was clutching a brand new pair of shoes as if it were the crown jewels he had just been given.  So be thankful that you can have that sort of a First World Problem, young child...

I know, get off the soap box, big guy, right?

Anyway, my nephew was another one of those kids.  I was like it and so was my sister, his mom.

"Uncah Beewl!  Santa Claus is coming soon and I am getting toys!"

Yeah he had that kids twang to his voice.  Uncah Beewl.  For the record, I never liked being called "Uncle Bill" because it reminded me of that horribly saccharine show Family Affair from back in the 1960s on US Television.   I had told my nephew it was ok, just call me Bill, but it didn't stick.

I was then treated to the excitement of a little pre-school boy telling me a list of toys and what he wanted to do to them.  Of course I was going to have a bit of fun with him.

"But, I heard you were getting a lump of coal!  Are you sure?  Maybe it is Santa Clothes who is coming, not Santa Claus?"

"But I heard that you were getting a lump of coal and some new clothes.  Socks and T Shirts for school."

I swear the kid believed me, but hey he was young still!  "See, Santa Clothes comes when Santa Claus can't.  Santa Clothes brings good boys and girls the clothes they need to go out in the world and be with their friends!  You are a good boy, right?"

I got the strongest "YES!" I could ever get from a kid.

He was on the edge of crying, I needed to back off a bit.  "We will see.  Maybe I can get to Santa and see what he can do.  But remember the holidays are soon and the sleigh is packed!"

My sister thought I had lost my mind, she may be right, it might have slid out my ear and rolled under the couch somewhere.

So when the day arrived I had found some items.  Wrapped in a nice pretty box was a bunch of kids socks.  Yep, had to do it.  Along with it was a separate box of a lump of black licorice candy that looked like a lump of coal.

Jon was not downstairs yet, so I slipped the two items front and center under the tree.

He came down, spotted the pretty little box with the lump of coal inside of it and opened it.

Jon perked up.  He opened the candy up and had a smile on his face when he tasted the stuff.   I see he had the same like for Licorice as I do.

Ok, not so happy about getting a box of socks are you?

"Jon, come here"  He was pouting thinking that his holiday gifts were over.  I had to make this right.

"Come on out to the Jeep.  I caught up with Santa but he said he was late and could I bring things to you personally? "

Jon's eyes were huge and he got real excited.

We trundled out to the big grey CJ7 that was parked in front of the house.  I remember some ice on the driveway that I skidded over.  I opened the tail gate on the car, and Jon got another big present.

This was the year of the fire engine.  My sister hated that thing, just like mom did.

But it was Perfect!

He went from being a pouty toddler to being completely happy with what he had.

The next couple years became a tradition.  Until he was around 18, Jon would get some licorice candy in the shape of a lump of coal.  A couple years I even got it back.

So the moral of the lesson was to calm down and Uncah Beewl will make it right.

And lumps of coal can be tasty too!

Happy holidays folks.  Glad you could share this fractured memory of days gone by in the prairies of South Jersey.
Posted by Bill at 10:26 AM