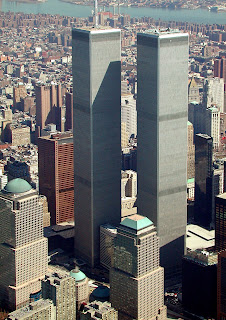 A Joke on a Saturday, as is customary, would just not be right on this day.

But today I did have a choice that thousands who were murdered by extremists did not have.  I was able to get up, early as usual, and complain that I should have known better to put on the BBC World Service to get the news.  As Usual.

Coverage saying President Biden would be visiting all three sites for memorials.  New York, Pentagon, and Shenksville PA I assumed.

BBC went on to review the last 20 years of actions in the middle east.

That morning in 2001, I was sitting in my office at my desk trying to get to any news outlet online that would connect.  The internet was flooded with requests and I was working at a major university in Philadelphia.  This was not a place that should have had problems connecting to a news site.

Today, though, I went on to walk the dog.  Or rather to be towed around the block by my own dog.

I did have that choice.

Running into a neighbor, I pulled the headphones from my ears and said "I should have known better than to listen to the BBC on 9/11".  I got lecture of a list of ways to avoid media ending with his plan to watch "Old Sitcoms".  That's what I do on a normal evening so I smiled.

I did have that choice.

I did also put the BBC back on my headphones and continued to the house.

Remember, You have the choice.

I kept thinking of when they had stopped all flights as of that day and the later resumption of the flights.  On the day of resumption, I was out in Fairmount Park skating a marathon as usual.  It was a clear day and I was talking to a random bicyclist heading south on West River Drive when a jet passed overhead on its way to Philadelphia International Airport.  I remarked that it was the first plane in "weeks" and we both rolled to a stop and watched it.

It's 20 years on.   There's a generation of children that grew up in its wake.  They will never know what it was like before.  If you wanted to say something had past for a while you simply said "That is so September Tenth" and went on.

We who can, should remember.  After all, we do have the choice.