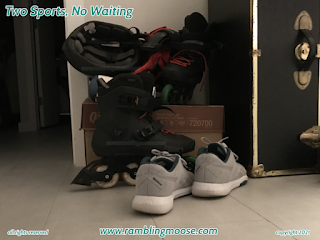 Over the months of this long drawn out epic, my mindset has changed.

If you don't want to get a vaccine, great.  When you get sick, don't go to the hospital and tough it out.  You made your choice, and you Lab Rats are effecting the rest of society badly.

And while I don't like repeating things I wrote, this situation has been on my mind lately.

You see, November 23, 2020, I wiped out on my skates.  Now when I say I wiped out, I say a nut from a tree fell from a tree in front of my lead wheel on my right foot and tripped me when I went under it.  Literally, no time to react.  I went down without realizing that I had been slammed into the pavement until after I "came to".  Broke my right clavicle.  First major injury since I started skating in 1993.  22,427 miles.

I've been hearing reports that the lab rats have been filling up the emergency rooms in South Florida because they have been getting sick.  I've also heard that there are some vaccinated who are getting sick and ending up there in much smaller numbers of about 1/2 of 1%.

So basically the ERs are full.  Or nearing capacity.  A Hospital does not want an empty bed because it's a For Profit business and it means they can't charge an obscene amount of money for that bed that night, but it does not mean that you want to be there.

When I was there in November 2020, I was greeted with a green flag on my door.  I was the only one.  The rest was full of poor souls that were struggling to remain alive.  So while they gave me happy pills and let me watch Willy Wonka and The Chocolate Factory and laughing my head off waiting for the Doctors to make a decision on what to do, people were dying around me and there I was laughing at the oompa loompas like a weird unicorn.

To say it was a surreal situation is quite an understatement.

Someone pointed me to a local South Florida inline skating group.  (Sorry, Facebook link.)  The page read just like old times.  The same vibe of the skaters getting together, having fun, doing marathons, skating new places.  I was deeply involved in the scene in the 1990s and 2000s in Philadelphia, and continued skating to this day.

And then... speed bump.  One of their skaters broke his clavicle in NYC and now has a gofundme page for his injury.  Luckily my insurance is better than that.  Or else I would be in the same spot.

We need socialized, single payer health care.  Nobody should be bankrupted by 20 dollar aspirin and 180 dollar shoulder braces.  And stuff your fox "news" republican infested nonsense, the rest of the world came to this conclusion decades ago.

If you dislike my opinion feel free to write your own blog.

That speed bump is way too close to home.

Yes, always on a measured trail and yes I always have kept count since 1993.  For me to strap on a heart monitor and skate with a GPS is a normal thing.

But for now, I am transitioning to a different exercise "For The Duration".  Assuming it does not blow out my knees, I'll be jogging.  I used to jog at Valley Forge National Park, three times a week for 10K.  I'd power up that one hill past all the ramparts and down the other side.  Pennsylvania can be quite hilly.

Back then I had a shortwave radio and listened to the BBC World Service jogging in a park devoted to the US Revolution.  The irony was not lost on me.

I can at least jog here in town and don't have to get out into the Jeep to drive to the park in Pompano Beach.  Once I get some distance going, I'll go up there for a change of pace, but these little warm up jogs are just training exercises to keep my weight down and to get used to this kind of workout.  I've lost 28 pounds since the beginning of lockdowns last year, and I will not get fat.  You see, obese people get sicker faster with Covid, it's a co-factor.

For now.  Someone else will use my parking space under the tree near the fire-hall in the park.  I don't want to chance being back in the ER.  Driving a manual transmission is a circus act when your right shoulder is not working due to a broken collarbone.

All you lab rats?  Do what you want but if you get sick, don't make it worse for the rest of us.  I'm already wearing a mask when I go to a mall and got my vaccines so I'm carrying your weight too.  When Grandma or your kid gets sick, don't run to me because you gave it to them, the rest of the world is sick of your garbage.