Welcome to Florida, Our Stinkhorn Mushrooms Are Fruiting and Not A Dog Toy 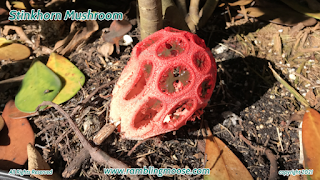 When writing a blog, you get to see what you write that makes people interested in what you say.  One of the articles I wrote many years ago was a picture of a Black Racer Snake perched in my Bougainvillea in the backyard of my house.  It was thawing in the morning sun, and even if it had lunged at me, it would not have been fatal.  They are non venomous.

It's a big hit in India and surrounding nations.  I'm not sure why.  But the videos of Cobras being "Charmed" in the streets always gives me a bit of a pause for concern.

Here in South Florida, we have a weirdly diverse wildlife.  It's not strange enough that the river that surrounds the island on which I live occasionally gets alligators, and I believe sharks have been spotted.   People come down here and call the place weird because we have Ball Pythons, Boa Constrictors, Iguanas, Ducks, Monkeys, and Parrots.  Everything has relocated here as a result of being released from captivity, either intentionally or not.

I'm sure that I am leaving a few out.  The stories of people "finding" lost dogs and cats that turn out to be abandoned in a remote area are many and unfortunate.

In this case, this is a dog toy looking thing that is a mushroom.  Don't let your dog play with it.  It's most likely poison.

The fruiting body comes up, pops open, and smells like rotting meat.  The smell attracts flies and the flies land on it.  Spores get on the flies and the plant will have a chance at having more of its kind in the area.  The next day, the "dog toy" shrivels up and looks like a deflated balloon.

The Circle Of Life continues in another place.

So if you are coming down here, please look but don't touch the weird wildlife.  It may have been from Cousin Jane from Toledo, Ohio but now it's feral and may bite.   That thing under the hedge is not a dog toy, it smells like a burger that has gone off.