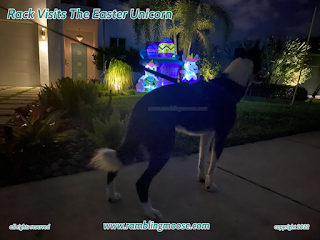 Have you ever walked around your area and found something that had you think "Well, that's just weird"?

The more that I look at this display, cute and colorful as it may be, the more odd it looks to me.

Mind you I do like the colors.  It's cute and whimsical.  There are two Unicorns, although one of them was laying down on the job of bringing cheer to passersby when I walked past a second time the day after.

There is a giant inflatable Easter Egg or four on top of a Plinth that says Happy Easter.

I would be very scared of the bird that laid a four foot tall egg, whether mythical or not.

Anthropomorphic Fictional Beasts aside, just exactly where do you find a Unicorn, let alone a Unicorn with a Yellow Horn.  Not just one, but two of these Unicorns too!  And they landed in this front yard next to a frighteningly out of scale collection of eggs, enough to make a huge omelete for the entire town no doubt.

I have to wonder what kind of beast laid a four foot tall egg no matter what it tastes like.  Figuring that a chicken is about a foot tall, and an egg is about two inches tall, you have to scale up this egg 24 times to be proportional.

Just how heavy would that egg be that would be laid by a 24 foot tall chicken?  More than a car or even an SUV I bet.  The house the display is next to is only about half the size of that as it is.

No, this flight of fancy is perhaps a bit too much for my normally logical brain to manage.  24 foot chickens scratching like a giant Godzilla over Tokyo, this chicken would be scratching for some truly giant worms... or would it settle for a Unicorn instead because a 24 foot tall chicken would most likely need a number of two foot long earthworms for food.

I can tell you we have some pretty long Ball Pythons here in South Florida, but I have never seen any two foot long earthworms.

Sorry Rack, I don't think that these Unicorns are going to be coming out to see you very soon!