Instead Of Flowers, It Looks Like I Am Growing PVC Pipe 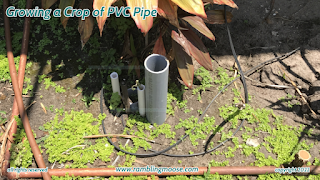 I think I am growing more sections of PVC pipe in my garden than I am flowers from seed.

I have always been able to grow from seed.  I have had basil growing in the garden that would have made my Italian side of the family proud.  That's not exactly an easy task in South Florida since the climate is not exactly friendly to it.  On the other hand, I remember summers in my own native South Jersey were hotter than I have ever seen it get here in Broward County since I moved here in 2006.

In other words they said don't.  I ignored them. 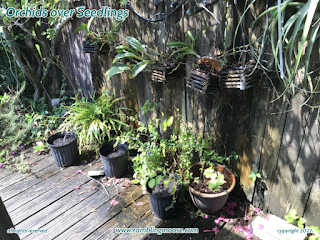 I have nursery pots all over the property.  They get watered on the drip feed irrigation or simply from being under other pots that are.  I know certain places in the yard are more secure than other, so things that are tender like little shoots from seed are normally started from seed in a pot under the orchids.

I was lulled into a false sense of security.  When I went to plant Zinnia, I just scattered the seeds in random spots.  When they were dropped in the pots, some actually have gotten to about a hand's length high.  Whether I get blooms or not is up to the ages.

I have aggressive landscapers, so anything I want to be safe, I have taken to making rings out of some reasonably large PVC pipe that was scrounged out of a neighbor's pool installation project.  It's obvious something is there, and the landscapers avoid them.  There is now a progression of size of things to allow things to grow.

However there's something else out there turning my tender shoots into a salad.

Don't let me catch you, I'll send you to your next reality.

So in various places in the garden, the shoots would get a little obvious that something is there and it would then disappear.   If it was on a Friday, I'd have a talk with the landscapers.   Last time it was mid week that they vanished.

Next step, I raised the wall on that.  Went to a longer piece of pipe, and now I am waiting to see if the seeds I dropped in there can grow.

When I was a child I had a habit of growing Marigolds out of season.  They would grow in a thimble sized pot that was under a larger pot with only one hole for light.  I would get a tiny flower out of that which was amazing to me.  "Bonsai Marigolds"?  Who knew!

So I expect this foot long piece of grey PVC to work out.

On the other hand, I am off to the yard to get a few "contractor's pots" and put some flowers in that.   May as well, I got the mulch at the park, the soil from the big box store, and lots of seeds from people that know that I like a challenge.