Ok, Which One Of You Abandoned An Unused Pilates Ball Near My House? 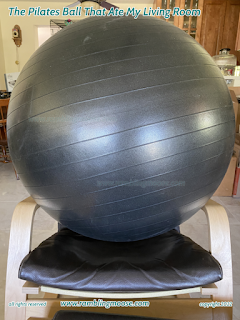 I am staring at a giant waist high bouncy grey ball and I just ...

Well I really don't know what I will do with it.

You see it happened a couple weeks back.  Early in the morning, well before sunrise, in the middle of an intersection, under a light, sat a box.

I phrase it that way because it was so absurd.

My neighborhood gets little traffic just before dawn.  There's no reason to be here, it is cut off from the world.  "You don't get there from here" is a good description.

I am up at 515AM as normal and by the time I get out to walk Rack the McNab SuperDog(TM), it's still quite dark.  I wave hello to the guy walking his cat, yes they do that here I guess to save on kitty litter, and continue East.

As I go on, I spot the box sitting there like someone wanted someone else to find it.  That would be me.  Everyone else looked at it in the small hours and scratched their head and probably assumed it was trash.

Yours Truly wondered why someone made a spectacle of putting it square in the middle of one of the few well lit intersections around.

South Florida needs more street lights and more sidewalks.  It would be safer.

I mean Square In The Middle Of it.

I lifted the box and laughed that it was full, and opened it.  It had never been opened before.  "Fell off da truck" if youse aks me.

I got the thing home after the early morning mile and it sat on the coffee table until I opened it up.  Everything was wrapped in Number Two Plastic hoping to be recycled.  I read the instructions laughing that I needed instructions to inflate a giant pilates ball.

I actually did.  The inflator that came with it was not exactly self explanatory but it did work.

I inflated the thing thinking that I would put it in the pool and use it like a float.

Fifteen minutes of flexing my quadriceps muscles later, I laughed at my own naive thoughts.

You see, that monster would not even roll into the hallway let alone out to fit through the back door to the pool.

I started asking people what on earth do you need one for.  I'd get shrugs and "Its For Your Core".

I'm an endurance athlete.  My core is fine.  My doctor thinks I am in good enough shape that he won't give me a stress test.  Fine, I don't want to run on a treadmill either as they are not fun.

So for now, I have a roughly meter in diameter charcoal bouncy ball sitting on my rocking chair.  I sat on the thing a couple times, and fell off.  I don't bounce as well as that ball does and if I want it in the pool I'll have to deflate it and re-inflate it for that task.

I will ask you though:  Just why would someone need a giant grey pilates ball outside of a gym anyway?

Maybe I'll bounce on it later.   I have a 10 plus inline skate workout to get to today at Mills Pond Park in Fort Lauderdale.  The Bunny Slope of skate workouts but that's where I am at today.

I will probably just shrug and laugh at it for now.