Is it a Sport Watch or an Electronic Handcuff? Gear up appropriately to analyze your athletic performance. 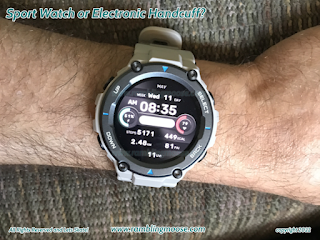 As I sit here with two watches on, I am asking myself is a sport watch useful or an electronic handcuff?

I honestly think that both yes and no can be equally valid.

On the other hand, when I am speaking as an athlete's trainer, I insist that the most important piece of electronics to a person who is highly attuned to their workout performance is a good kitchen scale that measures weights down to the gram.  Garbage in, Garbage out, you know.

Once upon a time, I started to workout.  Many people "start".  Some continue.  I am not pointing a finger here, I'm not judging.  I will say that eventually, you will get to the point where you realize that you need to keep records of what you are doing.  A pencil and paper can be enough.  I still have my weightlifting card from when I was working out every morning before work where I marked down which exercise, how many set/reps/weight I would do.

In a way that card takes the place of that smart watch on my left wrist.  A complex workout with weights absolutely needs you to record keep, and unless you're one of those "Eidetic Memory" people, it's just simpler.

For anything outdoors, for a very long time, I was able to just keep records in my head.

I used to run at Valley Forge National Park in Pennsylvania.  It had a challenging course, 5 miles, up and down hills, around trees, that sort of thing.  I made it a point to find out where 10 km was and would run from my car, once around the park, up to the monument, and back and was done.  I went at my own pace and the only thing I needed outside of clothes was my pocket shortwave radio which I would ironically listen to the BBC World Service.

Yes, in the same lands that the Revolutionary Soldiers camped.  I found it strange, but my needs were modest.

I transitioned to riding a bike and I found that I wanted to maintain a pace.  Finish my course in so many minutes.  I could do that with a watch, so I used equipment I had, a dependable old watch.

It took a licking and kept on ticking.  Or beeped to keep my pace.

Eventually I found my love for Inline Skating.  Rollerblading to the "normies".  I took to that easily and being what the fratboys at the university called "GDI" or independent, I would skate alone, all the while talking to the team members in Philadelphia and listening to what they were saying for training tips and taking mental notes.

Distance got longer.  Speeds increased.  Workouts stretched from the Art Museum out to the suburbs.  I eventually left the city for a course I carved in the suburbs on the Schuylkill River Trail.  With repeats, it was a 33 mile trail that I would do three times a week.  I was skating 100 miles a week, 162km.

Hypermarathons being a 3 hour and a half workout, I found I needed things to do while my mind just turned off while skating.  The shortwave was switched out for an MP3 player.  That old watch was switched out for a heart rate monitor.  I used to skate at a steady heart rate of 173 to 183 bpm, faster if I was climbing, slower on the way home.  The trail there is a Rails To Trails route that had a 1% grade.  So skating west meant you were climbing a gentle hill for the first hour and a half, then turning back meant you had a gentle assist going from Perkiomen to Valley Forge, Norristown, and Conshohocken.

Yes, the names in that part of Pennsylvania are strange.

What happens is that you are watching heart rate climb on the watch like a speedometer, and your time would increase or decrease and give you a rough speed.  4 minute miles on inline skates over an hour are reasonable if you are trained well.

While I was, I was also wondering if there was a way to improve on my own mental math.

I eventually moved down here.  When I broke my shoulder on a freak accident involving a seed pod shattering under my boot and slamming me into the pavement, we discovered that my resting heart rate had become scary fast.

Yes, that was what the Urgent Care doc said.  Since I could not find my old school HR monitor, I went shopping.

You see along with the skating, I also was power walking and biking around this part of South Florida.  Walks were easy to measure, once up and down the main street of this city.  Biking I did by distance as well.

But being the competitive athlete that now had to go from one discipline of performance to another of Physical Therapy, it was requiring that I strap myself into something that gave me full and immediate feedback.  Distance by GPS, Heart Rate by a strap got graduated to this watch that I now found I have to wear all day and night.  Because I wore it at night, I got feedback that I am sleeping better than my waking at 515 in the morning would make me believe.

I'm also on a feedback loop where the health insurance company would give me a discount in what we pay if I performed certain workouts.

I learned I am walking 4 to 5 miles a day.  The dog gets walked a lot and it keeps him sane.  I'm monitoring my heart rate on that because the software computes a calorie burn.   Resting heart rate is "low" but I'm doing a lot so the Doctor laughs and says we don't have to do a stress test.

Skating with the watch means that every mile of the half marathon I did yesterday vibrated my wrist and I got to see the split speed.  That's the speed you did for the last split, or mile.

I guess it is every KM out in the rest of the world.  Go run and tell me what you see, I'm too busy with seeing if all this Bio-metric information is useful.  I think so.  I am getting first person information in real time.  I am also noticing that the watch's GPS does not match the phone's GPS and being very particular in my record keeping, I will need to find a reconciliation between all of that.  In other words "A Man With One Clock Knows The Time, A Man With Two Is Never Really Sure"!

My own little Bluetooth cloud will talk to all the software.  I'm drawing a route in either Strava or Runkeeper that is fairly accurate to within a couple meters (yes, I know metric but 'Merica is not metric friendly even if our imperial measurements are defined in metric).

But strapped in I will remain.  My three sports, walk/skate/bike all are measured by the watch.  The Watch will pay for my kickbacks of about $20 per month.  While the watch is a birthday present that I am very happy to receive, (Thanks Craig!) it will continue to pay for things like the upgraded skates and the GoPro knockoff I got a while back.  Insurance rebates are a wonderful thing.

I'm not sponsored any more, although I was semi professional and sponsored by a skate shop when there was money in the sport.

It's not exactly easy to find skate parts at the high end so spending money has to be done carefully, and you have to know exactly where to shop and wait for just the right deal.  If you know of a shop with cheap 110mm 85a (or harder) wheels,you can help by telling me!  Wheels are a consumable part that wear out in about 500-600 miles, and cost $80 a set.

So while all that happiness is true, the timing works out well enough to replace wheels and bearings that the shop used to send along free when I needed them.

It all gives me a good excuse to keep the electronic handcuffs on every minute of the day except when I am in the shower.

Which is where I'm headed after today's maintenance Half-Marathon.