They have been working on this since April.  Planning stage was of course, before that.

But, it's finally at a point where it's interesting.  It being the trail at Pompano Airpark.

The entire trail is 4.5 miles plus another mile or so on the south side of the park that parallels the main trail.

For a Biker, that's a bit of a short run.  I used to get in 50 miles in a workout which just was a logistic nightmare, imagine going 11 times around this little loop for a weekend excursion.

I'm surprised when I see joggers running the entire trail in the heat we get here, but then again I used to run 10K at Valley Forge National Park in Pennsylvania so I shouldn't second guess someone else's workouts.

Walkers do segments of this trail as well.  Some even the entire trail.

I have even seen a few, very few, skateboards but this isn't really their thing.

Well good for you folks, it's a good workout.

Why is this exciting enough for me to ramble on about it?
Why is this just so totally Droolworthy?

Think about skating in a rink.  If you're on the old school quads, it's on a rink.  Polished floors of either wood or concrete.  Flat as a plank, smooth as a pancake.

Or the other way around.

Point is that it is a very specific sort of a place.

You really can't skate on streets in South Florida.  The cars will hunt you down for sport.  Trust me, it has happened more than once to me.

There is a scene of skating at the beach.  Personally, I can't see that, but admittedly I have a different goal when I am out.  Way too crowded, the surface is either textured concrete or bricks.  Can't get any speed out of that.

Now, consider Endurance or Distance Skating.  I used to skate 33 miles, three times a week, all at 15mph average for my workouts.  Can't really do that here.

However with this trail, I can do some distance.  That 4.5 mile loop I was talking about.

The City of Pompano Beach decided it was time to resurface the trail.  I've skated on worse but I won't argue it could easily have been justified.  I certainly won't miss the divots caused by subsidence at the Four Mile Mark or those repaired strips under the pavement in the second mile.

It's currently 2.5 miles all in one trail, plus an extra "bonus" mile on the other side of the south side of the park.

But it is smooth.  I mean SMOOTH!  As smooth as some rinks I have skated.  Polished.

Oh sure, it's flat as a pancake just like the rest of South Florida up to Titusville.  I've forgotten what it is like to skate on a hill since I moved here.  But this is like stepping onto an interstate highway after driving off road for so many years.

Must have been.  Every time I checked my heart rate while I skated it last, I was up above 180 BPM because I was skating so fast on it without thinking. 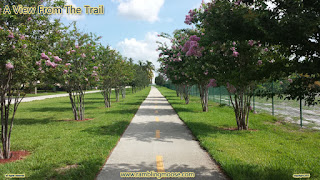 So if you do come to South Florida looking for a safer place to skate than at the beach, bring a lot of water.  They do need to get the water stops sorted out.  A part of the improvements is to add restrooms at the beginning of the trail at NE 10th and Federal Highway.

Besides, that sun is almost directly overhead and in our humidity and heat it gets difficult to make that run between the too few water stops.

But you will enjoy it.  How often do you get to skate black ice for 2.5 miles uninterrupted.

Now when they do the other two miles of the trails, it will be rather nice until the sun eats that asphalt away.
Posted by Bill at 9:51 AM