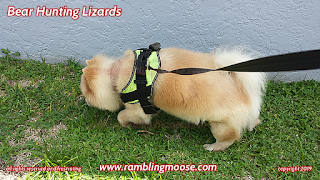 I got the request about a month ago.  I caved.  I forgot that if you are going to babysit another
person's dog, you should only do it at home.

If your dog and theirs don't get on, you should not do it.

Mind you, Bear, the other dog, and Rack, my own dog, get on quite well.  However Rack's personality quirk of being explosively happy with almost every dog on the planet does not mesh well with many dogs.

I did not want to take the chance with Bear, and Bear lives across the street and a few houses down.

So, great, now I have another dog for about 2 weeks.  How do I manage.  After all, I'm used to having Herding Dogs.  18 years of almost continuously living with McNab dogs have led me to expect specific behavior.

Bear is a Chow.  He looks like a teddy bear.  His fur is the consistency of the stuffing of my living room sofa or a new pillow.  He likes me, and the feeling is mutual.

But if you want to know someone, you have to try to live with them.  Since we are talking about a dog, we are also talking about a creature that has been raised to expect certain behaviors that may be risky or unacceptable - to you.

Never did this, lets dive in.

First walk out, Bear was expecting to be the Hunter, and not be told where and how he may walk.  Oh sure, he's got his walks, but he's decided that every single Lizard on the planet is to be eaten.

Not a good idea, Lizards carry salmonella and I am not interested in packing a 70 pound dog into my Jeep and visiting a vet.

I had to teach him "No".  Simple concept huh?  You see, I was almost pulled down by Bear.  There's a little alcove just left of the apartment where on each side of a door is a palm cluster.  Perfect place for the little critters to live and Bear attacks it every time through.  Not wanting to be face down on the pavement kissing concrete, "NO!" was said every time we went past it.

With four walks a day, by day 2 the charging at the walls lessened, by day 3 that spot was off limit.

He was still as slow as molasses, but he was now more manageable. 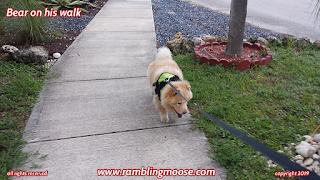 Next step.  I had to relax on the walks.  These weren't so much of a walk as a very slow trudge around the place.

This was because he was a Chow and they only need about 20 minutes of walking a day.  Total.  I had to look that one up.  Both me and my Rack are athletic.  I think a walk of anything less than a half mile is short. Bear on the other hand, no way.  I had to come back for that second walk of a day to "empty the dog" on those palm trees.

He refused to go off property.  I didn't understand it but it did sink in.  We are in South Florida, in summer, and the Lunch Hour is VERY bright.  Sun angles of about 85 degrees at this time of year.  92F yesterday.   Almost "Due Up".

Try that wearing a fur coat that will stop every breeze in its tracks.   I realized that this was the case when I saw him hunting the tiny little bits of shade we had around the building.

I'll hold off walking the boy until the later walks, just let him "Have His Head" and decide where he wanted to go.

Here we are mid week.  The first walk was much easier.  He did a lap around the building, spotted one Lizard and looked at me before he walked over to it.

How a 70 pound dog can pull down a tall man of 223.4 pounds (this morning) is a bit of a surprise.  Bear is overweight, but he is a muscular overweight.

A much better reaction.  But that was it, we went for a walk, he did what he needed to, and we came back home. 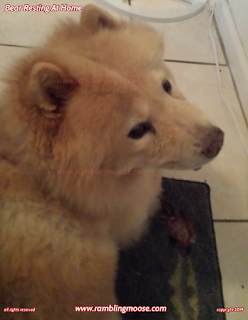 I've simplified and rationalized his food recipe.  There is way too much salt in the recipe, however I'm going to hold off managing that for them.  Have a chat with the owner and make sure that he understands that a dog of 70 pounds should never have any more than 200mg salt per day.
I'm not a vet, I only play a Know-It-All on a blog.

Sitting with him after his breakfast early this morning though, he was looking for attention, and giving me warm vibes with his brown eyes.