Endurance Skaters, if you aren't on Big Wheels, you should be. I am loving my 110mm Wheels! 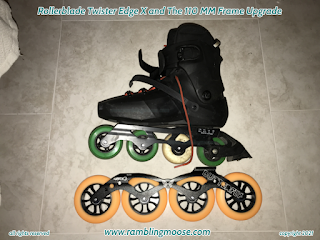 Oh that Internet Disclaimer?   I am not sponsored by anyone at this time, and have not been for years since the sport collapsed.  Everything here is my opinion and only mine.  Don't like my opinions you can close the browser and move on.  Furthermore, there is risk to inline skating and I accept that risk and I accept that you will make the decision to carve and grind at your own risk.

While that sounds like Mrs Meslar's 4 o'Clock club in second grade for kids who were too chatty, you need this.

Basically a carnival of errors happened to me when I upgraded to the first new inline skates I had since 2003.

During the dark days of Lockdownsylvania, I got to shopping.   I've always been partial to Rollerblade branded skates.  For me personally, and the endurance skating I do, they "just fit".

I went shopping, by which I obsessively combed the markets for The Next Great Thing.  It was summer and I was skating on worn out skates from 2003.  Soft Boot Skates do not last "that long".  Oh sure, if you want to be running around the neighborhood cul-de-sac with the kids, they work fine for your friendly Weekend Warrior Workout, but if you want to do serious distance, I have always found that you needed some serious support.

I skate Forward, Far, and Fast.

Not going to try doing that on some soft boot that flexes as I throw myself into a curve at a 4 minute mile.

I did settle on a modern boot.  Rollerblade Twister Edge X 80mm wheels.

And like that internet warning above, first time out, I shattered my clavicle on a freak occurrence of hitting a shell of a seed pod at 15 MPH and then the ground in rapid succession.  22,704 miles and my first break.

So it turned out that I had time to consider my purchase.  Rigid boot with a modern liner.  Some of the best wheels I have ever skated on since I started on top of that hill in Philadelphia in 1993.  ILQ7 Hybrid Ceramic bearings.  I have heat molded the boot to fit my own proportions and tweak them whenever I do a marathon.

I was fast, it was fast and I never had a warning when I came to on the ground on the trail.

I would not stop skating.  Every time I went to the Orthopedic surgeon, I said "Ok, Doc, Can I skate?".

I noticed when I got back to the trails a couple things.

I was as fast as I ever was, but there were others who were faster.   I attributed it to my uneven luck on this trail and I vowed to take more care.

However I also noticed that "That Dude" flying down the trail at a sustained speed that made my 4-5 minute mile pace look slow.  His wheels were almost the size of CDs instead of my Chocolate Chip Cookie sized 80MM RB Hydrogen Supremes.

My wheels were the best that I ever had skated on but they were small.

I began to research what has happened in the skating marketplace broadly and it was interesting.

Wheel sizes began to grow.  That meant that while your height stayed the same you moved up away from the pavement by an inch or so.  It's enough to throw your geometry off and require you to retrain your own self.

Wheels got harder.  Great, so those creaky little 70mm purple wheels I started on in 1993 grew to 80mm almost immediately but they went from 90A durometer on the "cheap" wheels to 90A durometer on the "expensive" wheels.  In other words, if you wanted performance, the wheel manufacturers realized that you wanted to roll, and to roll you need harder wheels.

The blister packed wheels you found at the big box stores were typically much softer at 72-78A.  Blister Pack typically means junk so your mileage may vary.

Wheel Count varied.  You had different mounts.  Traditional frames would be either 4 or 5 wheels per frame.  Now you had Trinity mounts and Tri skates with only 3 wheels spread further apart.  Old School wheels were spaced 1 MM apart, tri skates were much further apart, sometimes inches.  The spacing is sorting itself out still in the market.  A Three Wheeled Skate has it's own benefits like taking the junk on the trails much smoother.

So I gradually realized what I had to do.  I wanted four wheels for the stability.  I had skated on racing skates so I was used to the longer frame and since I am quite tall at 193CM 6'4", Longer frames gave me more balance.

I wanted bigger wheels.  I didn't want to "go up one size" but I also did not want to go to the largest that I commonly found.  I have seen skate frames for wheels as large as 150MM which is just too much for "trail use".  I compromised at 110MM because this was the largest frame that I could find a steel framed after market add on brake for.

Sure I could T-Stop and Power Stop but I'd leave that to Bill Stoppard up in Toronto or Ricardo Lino in Portugal.  I may consider going to the North Shore Marathon in a year or so but I would not do it on worn out wheels that have their inner edges worn down too early.

Besides folks, a separate brake is a LOT cheaper to replace than four wheels at $12 up to USD per wheel!

So everything being a compromise what did I gain?

I noticed that immediately I lost a minute off my split times.  I toned that down because that tree is still there and I don't want to hit a seed pod but I'm also able to hit some of the trail junk and glide over top of it. 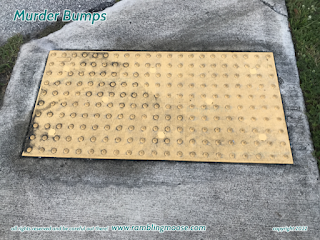 Yes, stability.  The trail I have been using at Pompano Beach Airpark has these things that the Internet calls "Murder Bumps".  Those yellow things with the bumps on them at the intersections so blind folks can navigate.  They're made out of Fiberglas and if you hit them wrong you fall and hit the bricks.

Been there, done that, don't want to do it again!

Guess what?  There was one pair at the park that I could not bring myself to roll over.  So I tried it at a very low speed and with the 110mm wheels... I just flew over them.  I was shocked how smooth these skates are.  While they are not perfect, it's not an automatic end to the day if they hit some of the mulch that gets kicked up on mowing days.  This is where a big wheeled tri skate will have a benefit.  Trail junk can get caught easily between my four wheels where a tri has the extra space and will just pass the stuff on.  Fresh wheels on a four wheel inline frame are spaced at only 1mm between the wheels, not much room for mulch. 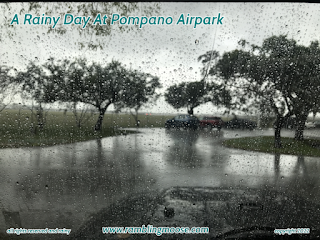 One other weird plus is that since you are higher off the ground, your bearings are further up as well.  Why is that a plus?  You stay dryer, and any water in a steel framed bearing race will rust them out almost immediately.  I got caught out yesterday in a rainstorm and had to skate back 3 miles in the wet.  I did slow to kick up less water at the very least.  When I checked the bearings this morning they were giving me acceptable free spin times.

If your 80mm big-box store blister packed wheels were bad because they were too soft, the new steel bearings that came with them will rust because you stepped into the grass on a dewy morning.

So that's where I am.  110 MM wheels, steel framed brake bolted to a light weight aluminum racing frame.  That is all bolted to the bottom of my RB Twister X boot.

I just got back from a rained-out workout today.  It was disappointing.  Last time I skated before that, I skated 27 miles, a proper hyper-marathon.  Today... Only 16.33 miles.

So take my word for it, once you train yourself you will love the upgrade.  Get the 110MM wheels and the longer frame.  Yes, you will turn like a truck.  Or Articulated Lorry if you're in England.  But they are smooth unlike anything you skated.

Now if you are out for "agro" and want to do tricks you can't do that on 110s.  It won't work.  Stick with your 60s or less and grind to your heart's content.  But me?  I'll have the music on to something really fast and skate the miles away.

See you on the trails!