Don't Let Your Fashion Choice Effect Us, Dress For That Workout And Leave The Spandex at Home 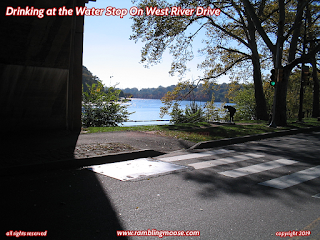 There's something called a shower thought.

Go take a shower and try not to think about this.  I'll wait.

Didn't work did it?

It's the mental equivalent to an ear-worm, a musical piece that gets locked into your mind on a loop.  "This is the song that never ends" is a good one.

My shower thought is that your fashion needs to not intrude on my space.

No, I don't mean the appropriate clothing that you see in appropriate places.  Australians call bathing suits on men "Budgie Smugglers because it looks like you stuffed a budgie, parakeet to those of us in Los Estados Unidos, down your shorts and are walking around with it down there.

There's another shower thought for you ...

Well, here's the deal.  I'm well known for getting up very early.   I have to force myself to stay in bed until after 5AM, an hour or two before sunrise here in South Florida.  It helps me get things done, and in fact I get more done before sunrise than many people do all day.

I got in the habit while working out.   The formerly asthmatic teen got into his 30s an athlete by running, then biking, then inline skating with everyone else who joined the fad.

Not a fad for me, I found that my long legs made this the sport I was built for.

I could run a 10K but it would bore me and blow out my knees, and did so multiple times.

Biking?  I'd need to go 50 miles to get in the same workout I could do on skates in 30.  Besides, who wants to fight traffic for 50 miles when it is tough enough to do it for 30.

I learned full well that if I got up at 5, I could be at the park, Fairmount Park in Philadelphia, where the roads were closed on Weekends until Noon, and get in a workout from 6AM until.

But it was a shared resource.  Meaning you had to literally fight for space at times.

The Nineties were a weird time.  People on Skates sharing the road with Bikers who demanded you be off "their" roads while they were making fashion statements in artificial fibers such as polyester and spandex.

Yeah we skaters and runners called them Spandex Wearing Freaks as they rode from the Art Museum to the Falls Bridge and back again over and over screaming at others to get off "their" roads.

So the bikers were in a pack.  5 to 50 of them in one large pack, getting their workout in while you had to fear for your life no matter what your workout was.

Mom, don't bring the kid and stroller down to West River Drive.  It's just too unsafe.

But there's another problem with that.

No, I don't mean the "Boob Walks" of people for a various charity walking 6 miles and feeling all chuffed because a penny on the dollar went to a Good Cause.

Oh, it's that ratio of return on investment that made that so laughable, not the fact that these boobs were out there walking to save the mud skippers or to publicize the use of cotton, or what ever cause they thought you needed to be involved in to the detriment of your weekend.

Penny on a dollar?  Yeah, I'll read to my own nephew instead, thanks.  If you ever are in Philly, the United Way has a better office than you ever will have.  The Palace On The Parkway for the Parasites On The Parkway.

You get 50 arrogant people on bikes riding 25MPH around people who they don't believe belong on THEIR planet, and a good proportion of them will be wearing workout clothes.

Another reason why those boobs were laughable.

You see, Spandex, being a synthetic, will pick up your "funk" faster than if you pushed a nose into your "junk".

After 50 of them get going, and 25 or so are sweaty and getting "funky".  No, I don't mean in the good way as if it is a Parliament-Funkadelic song, I mean stanky.

Now, you are standing at that water fountain that is midway between The Art Museum and Falls Bridge and they're coming.  Taking over both the trail and the street, hauling their self-absorbed, and non absorbent selves past you at an unsafe speed.

Wait.  Oh about 30 seconds go by and you smell them passing by.

Well luckily most of the regular workout people know of this effect, but these rarefied people on Their streets, getting in Their workouts don't know that their stank is being passed onto those of us who are not participating.

It's Present Day.  Or 20 years from now, assuming that those Rarefied Bikers are still wearing Spandex and other non natural fibers of course.

Actually it was this morning.  I was up at 5AM, on my walk and midway, I was on Wilton Drive.

I expect this won't be going on 20 years from now because the drive will be narrowed and not so convenient for people to cut through to get from point A to point B.

But for now... I really don't think they got the Memo.

I'm walking my boy Rack, the McNab SuperDog (TM) south on Wilton Drive.  An hour and a half before sunrise give or take a few.  I hear a familiar hissing sound of chain on gears and overly loud voices talking about some nonsense.

After all, before 6AM, anything a loud voice says is bound to be nonsense.

I see a cluster of spandex wearing frea... er bikers coming my way.

My PTSD Flashback to the late 90s comes to mind.

Yep.  Stanky Spandex Bikers pushing towards illegal speeds riding on Wilton Drive.   The decidedly rank scent of a bicycle rider who definitely needs to run through the shower and burn his spandex wafts on the little air that is moving predawn hits me.

No breezes, too many bikers, yep, it's a weird flashback brought forward to this day by someone whose hygiene is more equivalent to the homeless guy who they looked down their collective noses at when they rode through downtown Fort Lauderdale fifteen minutes and three miles ago.

So remember, fellow babies, friends don't let friends wear spandex in public.   What you do in your own house is your own business, but if you're going to stank up the trails, the rest of us are going to know it!

Oh and yoga stretch pants at the mall?  Yeah, we're looking at you too.   You really aren't as lean as you think.
Posted by Bill at 9:32 AM