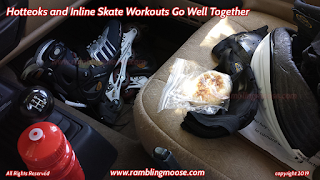 You know, the one person who listens to Classic Obscure Disco but not Bee Gees or Donna Summer in 2019.

Who is inline skating and regularly has workouts that burn a measured 1600 calories.

I'm the guy who prefers food from other cultures as well.

Heck, I'm driving a 16 year old Manual Transmission Jeep Wrangler because I LIKE it!

I could go on but I wear that Outlier tag with pride.

The thing is that I went out skating and found that while I was burning all those calories, I needed something to bring my blood sugar back to normal quickly.

So I made Korean Donuts again.  Hotteoks.  Again.

I think it is safe to say that I was probably the only person in my city plus some of the surrounding cities who makes these things.

I had "extra dough" when I was making Pizza for Memorial Day, so I thought this would be a perfect time to tame the Post Workout Blood Sugar Crash.  After all, food left in the car has to be temperature stable, won't spoil, won't spill, and so forth.

"Energy Bars" would work but they're usually chock full of weird preservatives to make them "Shelf Stable".

Hotteoks could sit on my Jeep's passenger seat inside a plastic bag with my Skates and Pads while I go to my workout, and wait for when I need them there or inside my pack.

If you reduce it to the absolute minimum it's a Cinnamon and Brown Sugar filling inside of a dough ball that is pressed into an oiled skillet until it is cooked, then flipped.  Two ingredients.

Sure, the dough has to be a good one.  Like almost everything here, I use my sister's Pizza Dough recipe that is linked here.   I made that recipe on the dough cycle of my bread maker with 10 ounces of water.

The filling was a "common" teaspoon of packed Brown Sugar plus 1/2 measured Cinnamon. Cinnamon Sugar is traditional but you can use Jelly or Custard if you wish.

Consider it a way to make a Hot Pocket and stuff it with Pizza Fillings or your favorite Sandwich Fillings.   PB&J anyone?

I'm getting ahead of myself here. 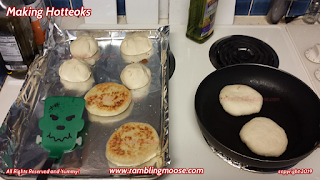 Enjoy while warm or reheat in the microwave!

Oh and have a good workout, meet me on the trails and I'll tell you the story of when ...
Posted by Bill at 9:58 AM