Someone threw a party in town last week.  Wilton Manors and Wilton Drive hosted Stonewall Pride Celebration for 2010.  I got an invite to Commissioner Tom Green's apartment for a get together party with him and his friends including the Mayor, Gary Resnick, and some other local friends who are active in the city.

The apartment is four floors above Wilton Drive, so I managed to get the pictures from a Birds Eye View.  They are not at people's scale, but I did manage to grab a few good shots. 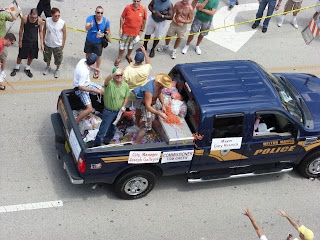 Waving at us is Tom Green, the Commissioner and the Host of our party.  It's only fitting to lead off with his shot.  This is the confiscated Police Pickup Truck that we either got in a "police confiscation" or bought with the funds that were from a confiscation.

Think of that when you go out driving.  Don't become a DUI, you'll be paying for our next Truck.

Unfortunately the shot shows the back of the Mayor... Sorry, Gary, I didn't get a clear one of you but if you hear this and would like one posted send it along, I'll be happy to.

What's next are the view North and South on Wilton Drive from 50 feet up.  We have this raceway in the middle of town that we're trying to decide how to do something about it... but for the day it served as the setting for the party.  You can see here what it was like as everyone was waiting for everyone to arrive. 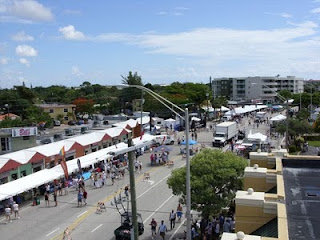 The View North toward NE 6th Avenue before the party got started... 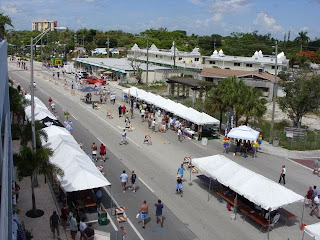 Looking South and West-ish from the balcony, here's the view before.  We did get a good view from above. 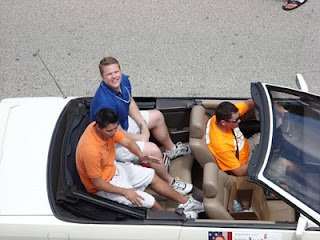 I did manage to get a clear picture of Vice Mayor Justin Flippen here smiling in a blue shirt.  Justin you look hot!  It was 90 that day and we were all wilting by the time you got there.   It really did turn out to be "Wilting Drive" as some of the wags call our Drive.

Also there were Commissioners Ted Galatis and Scott Newton.  I didn't manage to get a picture of either but I did manage to try to get Scott to toss a handful of Mardi Gras beads up four floors.  He only made it to the second floor.  Sorry Scott, better luck next time!

Someone had said that they were on the ground and that one of the nicest things about the festival was that people were tossing Mardi Gras beads from the balconies "Just Like New Orleans".  I'd add without the public drinking and the crush of people, but it was a nice touch. 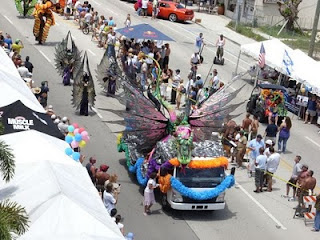 What is a parade without some dancers and floats?  This dragon with wings was there with a coterie of dancers behind it.  Beautiful work, and as it was going down the parade route, the wings were flapping and head was reaching out as if to find a tasty dragon snack in the crowd. 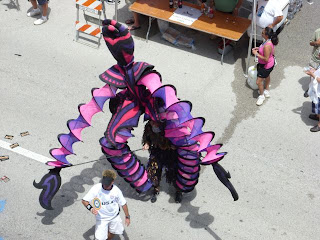 This is one of the dancers that followed the Dragon.  The person in front will give you some idea of the scale of that costume.  We were guessing that it was around 10 or 12 feet tall.  Luckily the thing was made out of a thin material, but I can imagine how tired that person was by the end of the "workout"! 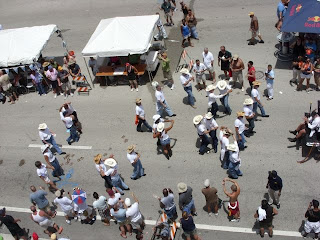 Speaking of dancers, here are some cowboys dancing.  This one's for you Pat, they were square dancing all the way up the Drive and let me tell you from four floors up it was LOUD.  Country Music isn't my thing at all but they did seem to have fun there. 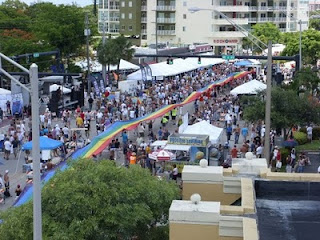 Here was the view at the end of the Parade looking North toward NE 6th Avenue.  The crowd had finally filled in and the rest of the day was this crowded.  90 degree heat and thousands of people.  I managed to last another hour before hiding at home in the pool for a bit and came back out after Dinner for a little. 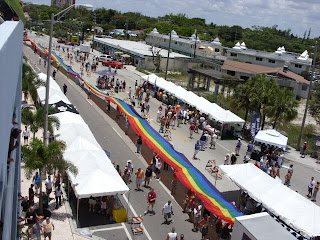 Finally the last view - South on Wilton Drive.  The crowd was filing back toward NE 6th Avenue and the bandstand.   The Party was there, and so was I for a while.  These Festivals we have here in Wilton Manors are always well attended, well behaved people.   Always fun.

So when is the next one?  In a couple months?  Wicked Manors for Halloween?
Posted by Bill at 8:07 AM