Weird Caterpillars from the Sky 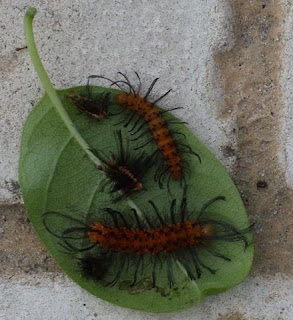 I've had a Black Racer Snake in my Florida Room (Think Screened In Porch with Windows), more geckos that you can count, ants that periodically decide to try to carry off the TV set, moths that try to fly into your ear at night under the lights and others.

We keep the house closed, it's coated with a fine layer of pesticides, and really all of the above are more of a rare occurrence.  I don't actually hunt down the geckos that get indoors, but I've been told that I should because they'll starve.  There's this big clear plastic cylinder that I got from some candy that I use to humanely trap the little things and relocate them out to the garden where they'll thrive.  The rest are an annoyance to be shown the door.

Looking out my front window there's one little gecko flashing its dewlap at me right now along with a monarch butterfly that just went by on the morning breezes off the ocean.

When they start falling from the sky on a leaf it just is getting weird.

I've realized a long time ago that when you live in an urban setting to watch where you step.  There's an apartment building near the house that I walk my dog past daily that allows dogs.   Where you have dogs, you have interesting things to dodge... not everyone cleans up after their dog, even on a main thoroughfare in front of a "Luxury Apartment".  Knowing those who are privileged in the past, I am convinced that the more likely you are to afford a Mercedes Benz, the less likely you are to live well and do the right thing...

Clean up after your pets ok?

I didn't really expect to see these orange hairy beasts falling from the sky that day.  The story is really quite simple.   I was walking down Wilton Drive past the Gables and someone was tending to the vines that they have growing on a pot clinging to the railing, three stories up.  I've grown vines when I lived in an apartment, morning glories were my favorite since they were basically weeds with pretty flowers.  They all need tending...

I heard a squeal.  30 feet above ground level I looked up at a man hanging over the edge of the balcony who looked as if he was doing some work, and looked back to walking home.   Mid afternoon on a weekend, you don't expect a lot going on, especially during the Off Season so I waved and went on my way.

Three steps later, I saw what he squealed at.   Those caterpillars.  Ugly things, I guess he didn't want a visitor and ejected them so they could para sail to Earth.  I'm sure they survived.  After I took the picture, they had recovered their little furry caterpillar wits and started migrating to the plantings next to the building.  I bet they've found their way,  went into a cocoon and made beautiful butterflies from those ugly hairy creatures.  There certainly are enough of them flying around.

Ugly Caterpillars from Heaven may sound like a Japanese Monster Movie on the old UHF TV channels, but its all part of the wonderfully odd circle of life in the urban sprawl that is my home.
Posted by Bill at 8:46 AM