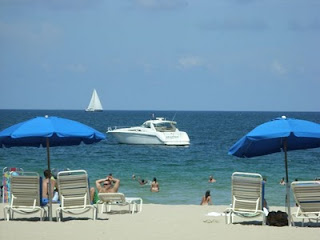 Yesterday cleared from a fleeting visit.  A kiss in the night, we had a small storm.  More like a long day of grey and rain with not enough wind to speak about.  The News Stations did their best to scare the city into a froth worthy of my morning coffee, but all that happened was that we ended up watching a couple of lines of rain flow through.

North of us, there were more storms.   It seems as if once Tropical Depression Nicole spent herself out as being "tropical" and became Extra Tropical, she got her strength up.  The areas that aren't built to take it got flooded and the national news were showing us footage of Lancaster PA and giant puddles of water and a "massive" sinkhole.

It swallowed a rather typical for the Amish Country,  red shed.

Here it was a yawn.  I've seen The Four PM Thunderstorms be more vigorous, and that is how we like our Tropical Storms.   Fill the pool so we can go to the beach tomorrow.

Like these folks.   They were at the beach back in June, and there will be others there today once it warms up.  It has been cool ever since Nicole came through, and I caught myself listening to myself speak over the Earth Wind and Fire while looking up at the moon, directly overhead, say that I may have to shift over to long pants.   Yes, the ultimate sacrifice for the cold of the morning, long pants.

The Aquasition may not be back at the beach this day, but it will be a pleasant one here.   We don't have a subway to flood, and the soil is more like a coffee filter where the rain hits it and flows through after spending only a little time to dampen things.

I know that the television news programs have to sell their soap and cars, but I have to wonder whether telling the world that New York City's Subway system may drown because of the torrential downpours makes sense.  I haven't willingly watched TV news since the 80s as a result of that FIRE! MURDER! WEATHER! CORRUPTION! news format.

I guess I should check the news... Nope, nothing.  The Discovery Channel will have to be the home of the destruction of a major city for another day.  New York, Philadelphia and Wilton Manors are all safe.
Posted by Bill at 7:43 AM