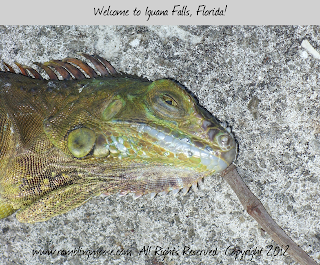 How would you like to wake up to one of these prehistoric looking creatures on your pool deck.

Yes, it is cold (for us) today in South Florida.  The Iguanas are now falling from the trees.  When it gets cold, they lose their ability to manage their body temps and out of the trees they fall.

Last night it was about as cold as it gets.  It hit 42F.  Sure, to someone in Minnesota or Canada, that's nothing.  When I lived in Philadelphia, this was still fall weather since it's going to hit 65 today.   But when you live in a house with leaky jalousie windows that are just slats of glass designed to let the breezes flow through in warm weather, you find out just how ineffective the heater is in the house.

There are two schools of thought with "frozen" iguanas.

1) Leave them alone.  Nature will deal with them.  If it is still alive, and some of them just get stunned and later shake it off, it will thaw out and wander away.  Eventually.  If it isn't alive, the vultures and the buzzards will deal with them and there's always the neighbor's cat.  Awww Bandit!  Cute Cat!

2) Send them on to their next life.   Iguanas in South Florida are classified as an Invasive Species. They are basically escaped pets.  Someone had them as pets and they ran off or were set free.  Now we have the 23rd or so generation of these Green Iguanas.  The way the people in this class see it is that it is the same as having packs of dogs or cats running around in the neighborhood.  They can be destructive.  They don't "Share" your plants, they will devastate them by trying to get enough food.

If you are in the second school, state law requires you to kill them humanely by freezing them.  Your home freezer would do the job.  Once you have a frozen iguana in the house, consider that many people make a stew out of roasted iguana.  It is a treasured dish in Trinidad and Tobago, although I have neither had the dish nor have I had the pleasure to visit Trini other than by their music.  I'm a great fan of Soca Music but that is a different story.

When I was preparing for this article, I had originally taken the picture at 7AM and thought "this one's a deader".  Now at 10 I realized the picture was out of focus so I retook it and here's the shot up above.

I was right though, that iguana is stiff as a board and it's sitting in the sun.  I'll have to get the shovel and the plastic bag.
Posted by Bill at 10:26 AM