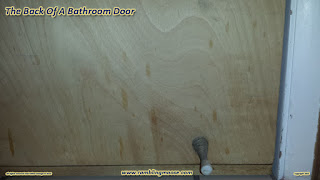 When you buy a house that wasn't made for you, you expect little strange things.

Even if you are the Uber Home Improvement God who knows how to build a house from scratch using a hammer, hand saw, and maybe a screwdriver when you break your thumb nail putting the covers on the light switches, there will be little subtle things that were done not quite the way you planned.

Come on, admit it, no house is perfect.

We came from a 1863 Town House in Chestnut Hill Philadelphia.  If you stood in the middle of the dining room and bounced, the floor would bounce with you - it was held in place by a system of steel girders and beams.  Basically it was a bridge.  A bridge with very very old wood.

Here, the house was built in 1957 or 1968.  The city's records aren't quite clear on that.  We are the third owners.  The first owner put in a swimming pool and air conditioning.  The second owner lived here longer and there are some stories that he lived here "harder".

I've heard stories about a wedding held where there was a platform built over the pool.  There are the initials of the police officers of Wilton Manors during the 1980s in the cement by one light pole.  I've heard echoes of stories that were alluded to and never finished because "I just can't".

But the place isn't perfect.  If you walk on the tiles here, that were laid over the original grey terrazzo, some of them are silent, others are hollow.  The grout needs to be replaced.  The tiles themselves are stained from a carpet pad that was left in place so long that it welded to the floor.

Don't get me started about how dirty the carpet was when I pulled it up.  Pepto Bismol Pink went out immediately upon Move In.

But I'm used to doing home improvement.  I can spackle and plaster better than many professionals, and between the two of us, Light Plumbing and Electrical work are covered.

But I had a Home Improvement OCD Melt Down.  It was caused by the morning bathroom, um, use.

Seated on the throne, the bathroom door was closed.  It is a hollow core door that I can barely pass through without brushing my shoulders on either side.  I walk through it on an angle.  I'm a tall guy, beefy, and in shape, and that damn door is narrow.

I'm looking around the room.  There are things that need to be fixed.  I'm thinking that since we're at a breather in the Home Improvement Binge of 2015, and there will be no construction contractors in the house until next week, I may be able to get caught up on some backlogged maintenance.

Vacuum up the dust and bits of caulk and spackle.  Pick up some wandering screws or nails.  Look at the vertical blinds in the living room and make adjustments so they swing better.

But then I made the mistake.  I looked at the back of the door.

See, I am used to things being not quite right.  If you are standing in the living room and look down you will see the discoloration from that ugly pink carpet and the pad underneath.  I have managed to keep things serviceable here, if not perfect.  The walls are thankfully washable paint, so I see something and I grab the ammonia and clean it.

Except that hollow core door.  You see, it is completely unprepared wood.

I can't say it is unstained.  It was stained before we got here.  Just not "Wood Stain".  I am used to Wood Stain, I'm something of a woodworker myself.  Basic carpentry I enjoy.  Shop Class in 7th and 8th grades was fun to me.

This isn't Wood Stain.  This is something entirely... else.

So cover me, I'll get the ammonia from under the bathroom sink and ... wait.

You see, if I clean that stuff off, it is probably soaked into the untreated wood.  That means it will have to be treated.  Primered and painted after a light "prep-sand" with some 220 or 400 grit sandpaper.  Now in my mind that meant some nice high gloss washable white paint, although maybe a wood stain would be just as good.  Polyurethane, like the stuff you use with the windows open so you don't get high and pass out in a daze.

Hmmm, this bears some more thought!

If I paint that wood, I'll have to do both sides.  Great!  Now I have one door painted.  Out. Of. Six.  I can stand in one spot in that short little hallway, only 6 tiles long by 3 wide, and touch four out of six doors.

One door will stand out.

I'll have to prep-sand the other doors.  Clean them off.  Get the dust of 50 to 65 years off the doors.  Breathe, then start to paint them.  Volatile Organic Compounds floating into the air.  Probably will end up killing the Parrot.  Definitely kills off a couple million brain cells.  Lower the IQ by 10 points.

Ok, so now that the doors have been painted, take a breather and look around.

Hmmm.  Stark White doors against that faded woodwork.  That looks rather shabby.  There's a bit of a remnant of that washable wall paint leftover.   I can still see that horrible 1957 or 1968 Pepto Bismol Pink under a few spots here and there on the woodwork too.  Let me touch that up.

Now we are at painting six doors, six door frames.   Are we done yet?

Of course not!  You see the walls are a color that is "Ecru".  Off White.  Who ever got the idea that walls should be "Off White" in the first place should have been terminated.  Why?  Off White looks like White that strayed.  It looks like white that was dirty.  As soon as it was painted.

Against my newly nice clean zinc oxide white washable door frames and doors, that wall covered in Ecru Beige Off White Bleah looks like someone had been smoking in the house for decades.

Instead of calling it Ecru, I'll call it Smoker's Fingers Beige.

So we paint the little hallway.  Find a color.  My own vote would be Pure White.  Zinc Oxide.  Like the nose of an Australian Surfer White.  All Bits On.  Hex Code #000000.

I'll get overruled and it will be Ecru again.  Why?

You see if I paint the walls back in the little hallway, I will have to paint the rest of the house.  All of it.  Living Room.  Dining Room.  Kitchen.

Oh sure, it will get done before we eventually sell the place.   After all, cleanly painted walls are worth about 3 to 5 times the cost you put into getting the walls painted on the resale market.

Then get THEM to do the painting.

I think all of this will just wait.   I'll stop with the ammonia on the walls.  I hear ammonia does a lot of good!
Posted by Bill at 9:22 AM