A Dog's Portal To The World 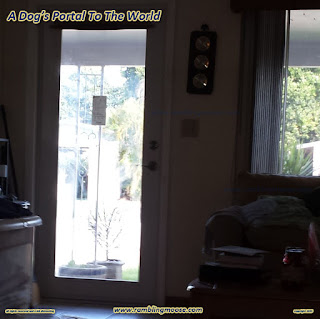 Back before I descended into Home Improvement Hell, there was a door on the laundry room.

It was a smallish door, rather appropriate for the mid-century design of this house.

The door had a problem.  It had a giant hole in the middle of it that was covered with Jalousie Windows.

In otherwords, you could have broken into my house by simply knocking out a slat of glass, lifting it up and removing the rest.  They were all held in with clips and those clips were not very sturdy.

But hey, they were security glass because they were FROSTED!

Yeah, that will stop an intruder, won't it?

Now, my girl Lettie moved in the house with me.  When one of the panes broke, I wanted to give her a gift.   I wanted to get clear replacements.  Two to be exact.

I removed the glass from the third and fourth slat from the bottom and replaced them with clear panes.  Then I replaced the broken slat and put in one of the frosted ones.

It was perfect.  At dog's nose height I had a spot where Lettie could go and watch the world.  She did, and so did Rack when he came here.

But we had to replace that door because it no longer was "Up To Code".  We'd have the entire house inspected once the windows were installed and the inspector would point to that door and make disapproving sounds.

It got replaced with a security glass door.  Frosted glass that looks like those old Milk Glass vases your mom would have, but it is 5/16ths inch thick and was rated for "Large Missile Impact", whatever that means.

It also meant that Rack could no longer look out.  The front door was solid steel and due to be replaced.

We got a twin to it.  Only this time, the twin would be clear.

We're getting a proper shade for it but for now there is this ludicrous shade there made out of paper.  It looks like that stuff you used to get meats wrapped in at the Butcher Shop, and is fan folded so you have to expect that some Japanese Geisha would be using it to cool herself off in the heat.

But the benefit is now Rack has a view to the world.

I on the other hand have to get used to being in a fishbowl or on display.

I tend to keep that paper geisha shade clipped, per design, about knee high.  There is a wrinkle outside of the shade.  You see, if you can see out, others can see back in the glass.

Last night when preparing for the Dog Walk, Rack was out on the front porch.  I had finished my last minute puttering and was searching for a couple of Dog Bags.  They're Brown for a reason.

Out of the corner of my eye, I see some glowing spots and hear yapping and yipping.  Rack was excited because he knew he'd get his last walk of the day.  I just didn't expect to see two glowing spots, one green, the other yellow, and very little else in the evening gloom.

I'll get used to it.  Just remember, when you're walking across the living room with one light on, make sure you have clothes on when you drop the laundry off in the washer.  Otherwise you'll be giving a show.
Posted by Bill at 9:43 AM