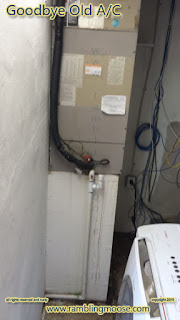 Have you ever had one of those lifetimes?

The roof, the windows, and now the Air Conditioning?

After the windows got removed from the house, and yes I mean all of them, we thought we could rest.  There is still one window from the old set to be done, there is still caulking and patching to be done, and the sills are not yet in place, but for the most part we're there.

Then, wandering out to the laundry one day, I spotted something.

The Air Conditioning in this house was installed some time around 1982, give or take a bit.  The air handling unit "gave out" about two years ago and the insides were replaced.  We were warned it wouldn't "Hold Water" much longer, so I guess Two Years is Much Longer.

The thing basically rusted out.

I guess you simply can't get every last bit of the water out of the air when you live in a climate where clothes can get wetter by removing them from the clothes dryer.

The Air Handling unit basically has a collection bin that feeds into a plastic water pipe that drops down and out of the wall of the house to the carport.  It's routed out into the garden and creates a little puddle where it waters the orange tree with the water that we "made" in cooking, cleaning, and showering.

Now it will be a new air handling unit, compressor, and thermostat.  Maybe some duct work.

All because you really can't live in a climate like this without it.   Air Conditioning is what made South Florida inhabitable.  Sure, they drained the swamps - which was not completely the best idea in the world, but the population didn't boom until Air Conditioning became reasonably priced.

Proof of that is walk around any given neighborhood from Key West to Jupiter, Florida at the dinner hour and listen.   You will hear compressors.  It is never silent.

Except my house, today.  No compressors.  Just construction.
Posted by Bill at 9:18 AM