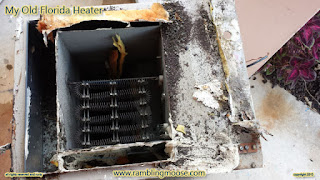 According to the almanac, which ever one it was that I saw it in, we do get a "winter".

It is all of two weeks long.

Or as a good friend of mine is fond of saying:  We do get all of the seasons here, just not the ones that stink.

Change that last word to something maybe a little more harsh for accuracy.  Four letters, still starts with an S.

But it is two weeks long.

My own Cherry Hill, NJ would descend into Fall somewhere around mid October, Freezing temperatures in December, but sometimes not until New Years.

Give or take a bit.

It would warm up to spring in late April, and by June we were in the mid to upper 80s.

If Memory Serves Me Right.

With Global Warming, that may be shorter, you'll have to ask someone who stayed behind.

Yes, there is Global Warming, No, being a Republican does not excuse you from that.

The weather up there gave me a lot of time to be indoors.  After all, you didn't really want to be out in all that cold slop did you?

We had a house with a gas heater.  It was about as tall as a full grown man, so to my childhood size, it was big.  There were six large burners in it that ran front to back, and were about three feet long.  Just shy of a meter.

When it kicked off, it would FWOOMPF! and light up solid from the back to front.  There was a port hole that fascinated me as a kid because Bright! and Hot!, Daddy!

To me a heater should be that big.  Especially something meant to heat up a split level home.  Those houses weren't all that efficient to heat or cool.

But down here I hear rumors of some hearty souls that brave our long two week long Winters and month long Spring and Autumn, yes, you guessed it, Without A Heater!

When they replaced our heating and cooling the other day, I took the chance to take some pictures.  The pictures came only when I looked in and was surprised just how little things were.

That picture is actually my entire heater.

It's about six inches square.  Look at the palm of your hand and spread your fingers as wide as you can get them.  About that big.

I think I have had floor heaters that were larger.  You know, those things that women would stash under their desks in office buildings because they have already put on three sweaters and it's cold in there will youturnupTHAT DAMN HEAT!

Those women.  Five minutes later and they're complaining it's too hot.

I was fascinated by it like a Great Dane would be with a Kitten.