Spider In The Sun 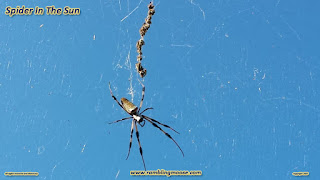 When you are walking along and see a spider that is about as large as your palm, you look.

Ok, you can stop looking at your hand now.  From tip of the leg to tip, it was that big, not the body.

What really caught my eye though wasn't that this creature was so large, but the web.   It looked like spun sugar glistening in the afternoon sunlight.

Spun sugar is one of those things that is fascinating to watch a chef make.  They create a form out of dowels or an upturned bowl.  They then make a sugar syrup that is super saturated and that would harden when at room temperature.  Then they get a quantity of the stuff and pour it slowly out and allow it to harden in mid air over the two dowels.

This video is worth watching just for the chef's glorious accent.

The end result is they get something resembling cloth or this spider's web.

The web itself was spun between two sets of trees about 12 feet apart.  Getting right in the right spot meant your eyes were treated to a shimmering display.

I walked over to the spider web, stopping someone who wanted to disturb the creature, and positioned myself.  As I am standing with camera in the air, arms angled in position, I hear: "Oooh A Banana Spider!"

The gnats weren't out yet, nor were the mosquitoes, but this spider was positioned to catch them for its evening meal.
Posted by Bill at 9:34 AM