A Meal Fit For A Monarch

I had to take Rack out back.  If I didn't I'd probably get dragged there by him, to the door.

Breakfast was done, it's our way.  We go out back, do a perimeter search and poke around.  It gives me a chance to fret over my gardens.

My normal limit for working with the garden is dependent on my flock.  Flock of Mosquitoes, that is.  If they follow me around, I usually blow off staying in one place for very long.

This was a morning where the winds were calm so I was very mobile.

I have a spot in the back of the yard where the hedges have stopped growing.  The Night Blooming Jasmine that was so perfect when we moved in here 9 years ago is now looking rather scruffy and there are holes in it where parts of the plant had died back.  One of the plants is pretty much gone.

Going into the shed and retrieving the clippers, there was work to be done. 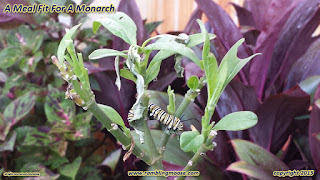 Before going back to the corner, I was going to trim back some of the Mexican Milkweed in the last pot on the irrigation chain.  That particular pot has one, and only one plant in it.  I can't get anything else to grow in it, and I can't even get a second milkweed seed to root in it.  Passive aggressive pot.

But there it is.  It goes through cycles.  Once the flowers come out, it gets discovered by the Monarch Butterflies that shuttle from here to the M.E. DePalma park.  I get to see them often, and any day I don't see at least one Monarch, it's a bit strange to me. 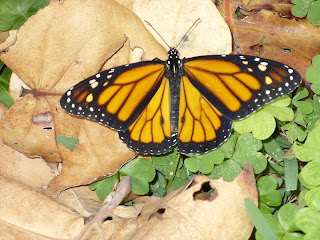 Of course it's shredded.  The plant, if you could be generous enough to call it that, is mostly sticks with a few leaves.  One Monarch to Rule Them All was on it.  It isn't that there weren't multiple eggs, it is that the plant never gets large enough for more than one Monarch to grow past the size of a thick hair.

Darwin would be proud of this battle of the fittest, because that is all that ever make it past Caterpillar stage.

There it was dutifully eating away the last few leaves that were on the plant.  The next day the leaves, and the Caterpillar, would be gone.  I prefer to think it found a place to turn itself into a Jade Green Jewel of a chrysalis, but who knows. 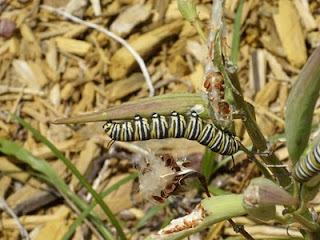 I vowed to take the seeds out there and try to start another plant, but I doubt it will succeed.  Each time they get past a few inches, something comes along and eats it.  That would be why I put the stuff there in the first place, food for Monarchs.  If they don't let it grow, well, that's their choice.

At least this one had its chance.

Maybe in that back corner.  The Jasmine doesn't seem to like it, and that will be gone back there as soon as I get working on it.  It was one trash can full of dead limbs this time alone. 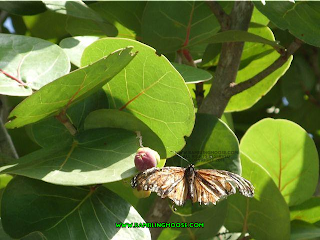